Chinese grass carp are herbivorous fish that have been purposely introduced into many Florida lakes and ponds to control aquatic weed growth. For many, grass carp seem like a good solution for aquatic weeds: the fish are relatively inexpensive and they consume problem plants, especially hydrilla. However, there are many factors to take into account when considering grass carp as a biological control method for invasive aquatic plants. While they are an effective and affordable solution for many lakes, grass carp are not a panacea. Under certain circumstances, they can create their own set of problems. 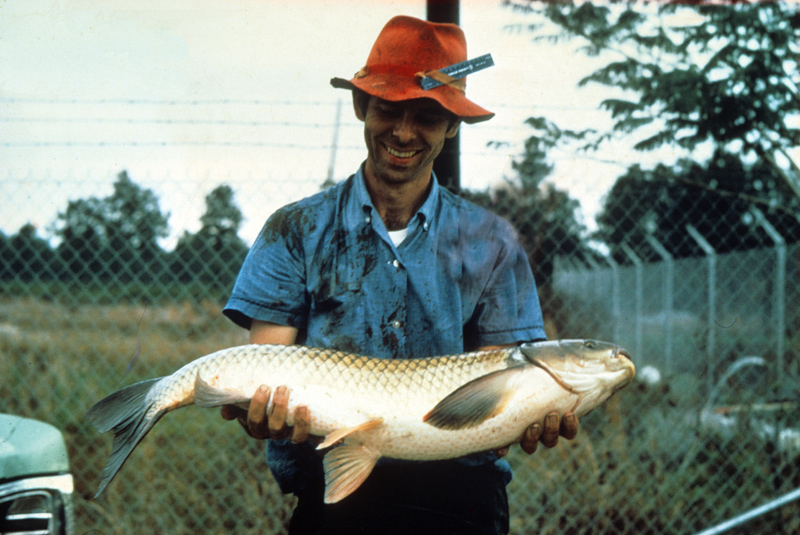 Also known as white amur, Chinese grass carp sometimes appear silver in color, but often display an olive green or dark gray hue on top with light gold or pale yellow sides. Their belly is silvery or bluish-white and fins are light green or gray. Unusually large fish scales are another distinguishing characteristic.

Normally, grass carp require free-flowing river systems to spawn and produce eggs, so it is believed they don't pose a major threat to lake systems. However, grass carp have been known to escape from stocked lakes or ponds into neighboring waterbodies; this may explain the presence of numerous breeding populations in a number of states along the Mississippi River. In Florida, three adult fish, including one gravid female, have been captured in the Suwannee River.

When grass carp are able to produce viable eggs, they are said to be "diploid" – they have the right number of chromosomes to reproduce. Florida law dictates that grass carp used for weed control must be sterile, or "triploid."

"Triploid" Chinese grass carp are hatchery-raised fish that have been sterilized by “shocking” fertilized eggs with drastic changes in temperature or hydrostatic pressure. The result is an extra chromosome in the egg, leaving the fish unable to produce viable eggs. This technique is used to eliminate reproduction in Florida waters.

Sterilization techniques are not 100% effective. One study showed that milt from some triploid males was used to successfully fertilize eggs from normal diploid females. Other studies have shown that triploid grass carp are able to produce viable eggs and sperm, although in very low numbers.

Because of these anomalies, some scientists suggest that every single fish be genetically tested by blood or tissue analysis before stocking them into a lake. A number of states in the U.S. have taken a more drastic approach and have banned grass carp altogether — both diploid and triploid.

Chinese grass carp were originally imported and stocked into Florida lakes in 1972 as part of an experimental effort to control hydrilla. When stocked in high enough numbers, the fish proved to be extremely effective.

However, when attempts were made to remove the fish, managers and biologists discovered the carp's uncanny ability to outsmart virtually every type of fishing technique. Nets, hooks-and-lines, electro-shocking, and poison baits were minimally successful, especially after the first attempts. It soon became apparent that once released, grass carp were nearly impossible to remove. As of 2010 there are still no easy ways to remove grass carp from a stocked lake.

In Florida, only triploid grass carp are allowed and a permit is always required, even when stocking privately owned waters. Permits may be obtained by contacting the Florida Fish and Wildlife Conservation Commission (FWC).

Aside from being hard to catch, grass carp have other characteristics to be considered:

Ever since Chinese grass carp were introduced to Florida waters, efforts have been made to develop a formula to accurately predict the appropriate number of grass carp for stocking purposes, based on lake size and plant coverage. The ideal goal is to stock just enough fish so that aquatic weed consumption slightly exceeds aquatic weed growth. 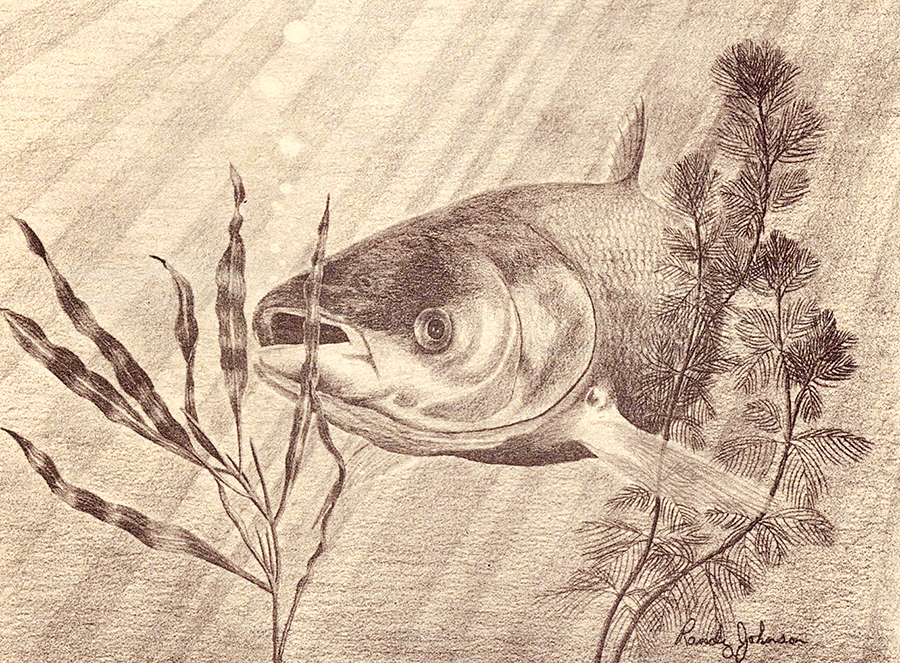 According to the Florida Fish and Wildlife Conservation Commission (FWC), this can be achieved with approximately two to five fish per acre of submersed vegetation. However, according to another group of lake experts, this formula has produced mixed results. In fact, when using Florida LAKEWATCH data, one study shows a breaking point for the use of grass carp in aquatic plant control.* When stocked in high numbers (greater than 10-12 fish per acre of aquatic vegetation), grass carp were efficient at eating virtually every submersed plant in a lake. In some instances, they ignored a few less palatable plant species (water lilies, bacopa and water hyacinths), but the rest of the plants were effectively controlled. When stocked in lower numbers (less than 10-12 carp per acre of vegetation), the growth rate of the plants was often greater than the consumption rates of the fish and very little plant control was achieved.

According to Florida LAKEWATCH's Mark Hoyer, this "all or nothing" situation isn't always a bad thing. If the goal is to completely control the growth of nuisance plants in a lake, grass carp provide an economical long-term solution without the use of herbicides. Also, grass carp are particularly useful in small urban lakes, where submersed vegetation is not as imperative for fish habitat.

How to Remove Grass Carp

When faced with hundreds of unwanted grass carp in Lake McMeekin in 1990, one individual tried to remove them using hook and line. He began by tossing soybean chum into the water from his dock. He then used molded dough balls made from uncooked biscuit mix. Using this technique, the angler and his neighbors reportedly caught more than 600 grass carp..

Some researchers investigated training grass carp to respond to underwater sound frequencies in order to herd them into smaller areas, capture and remove them once they were no longer needed. Two studies conducted at the University of Florida, IFAS Department of Fisheries and Aquatic Sciences suggest there was hope for removing grass carp from small lakes or ponds using this method. However, to date, nothing has proved successful.