Decades of experience and technical research have taught the Florida Fish and Wildlife Conservation Commission (FWC) and other plant management agencies that maintaining invasive aquatic weed species at low levels is the most environmentally sensitive method for managing these serious weed problems. Eradication (the complete removal) of a widely distributed and well established invasive plant species is often not possible or economically practical, so plant managers have developed the strategy of maintenance control. Maintenance control is the coordinated and consistent management of invasive plants in order to maintain the plant population at low levels. This level is determined by experienced managers at the FWC and decisions are influenced by factors including funding, available technology, and current conditions. 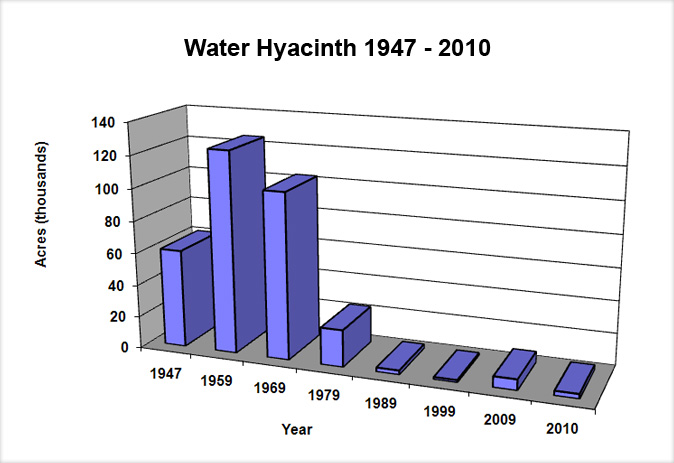 The maintenance control program recognizes the important roles native aquatic plants play in aquatic and wetland ecosystems. Native plants are not the target of control activities except in those rare instances where they create problems for navigation, flood control, or other public welfare considerations. This program is largely implemented through routine herbicide applications focused on controlling invasive aquatic plants.

In Florida, frequent herbicide applications under the state's maintenance control program result in approximately 20,000 – 30,000 acres of floating plants being controlled each year, with a goal of fewer than 5,000 acres being infested at any one time. This sharply contrasts with previous conditions when as many as 125,000 acres of Florida's public waters were covered with floating plants as recently as the early 1970s.

The Fish and Wildlife Conservation Commission’s stated goals for maintenance control are to:

Why Maintenance Control is Needed 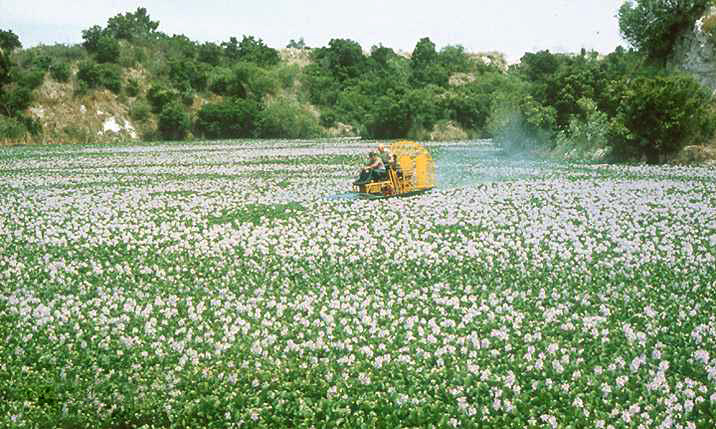 Attempting to control a field of water hyacinth, AFTER it has become a huge problem.

Allowing invasive aquatic weeds to take over a waterbody may render it unusable for recreation and fishing, displace desirable native plants, adversely affect fish and wildlife populations, and interfere with flood control, irrigation and drinking water supply. When rivers and lakes become completely covered, they can become breeding grounds for mosquitoes, and pose health and safety dangers to the public. Maintenance control is a proactive effort to manage plants before lakes and rivers become completely covered and require “crisis management”. 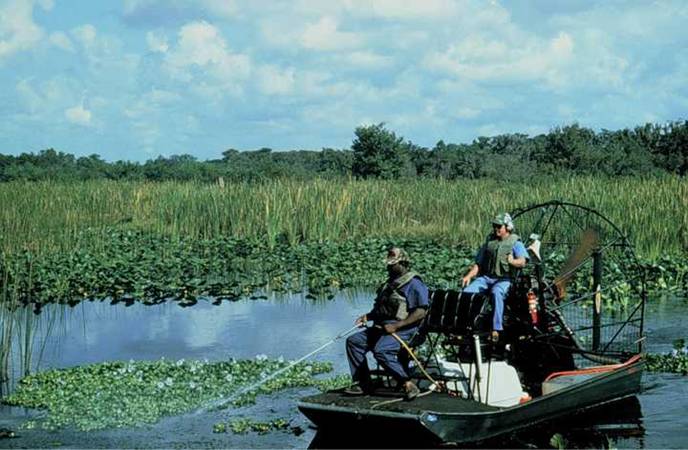 Maintenance control: consistent management of invasive plants in order to maintain the plant population at the lowest feasible level.

Who is Responsible for Maintenance Control?

Florida law mandates that an invasive plant control program be administered by the Fish and Wildlife Conservation Commission that focuses on maintenance. A maintenance program is defined in the Florida Statutes as “a method for the control of non-indigenous aquatic plants in which control techniques are utilized in a coordinated manner as determined by the commission.” (369.22 (2) (c), F.S.) It is a systematic, planned approach for controlling non-native invasive aquatic weeds. The specific goals and objectives of each management plan are developed through interagency coordination and public input. The FWC administers the maintenance program involving state, local and federal governments as well as public stakeholders, ensuring statewide cooperation and collaborative protection of Florida’s valuable natural ecosystems.

There are many goals in the maintenance control of non-native invasive aquatic weeds which are common to all properly planned and conducted management operations. These include: 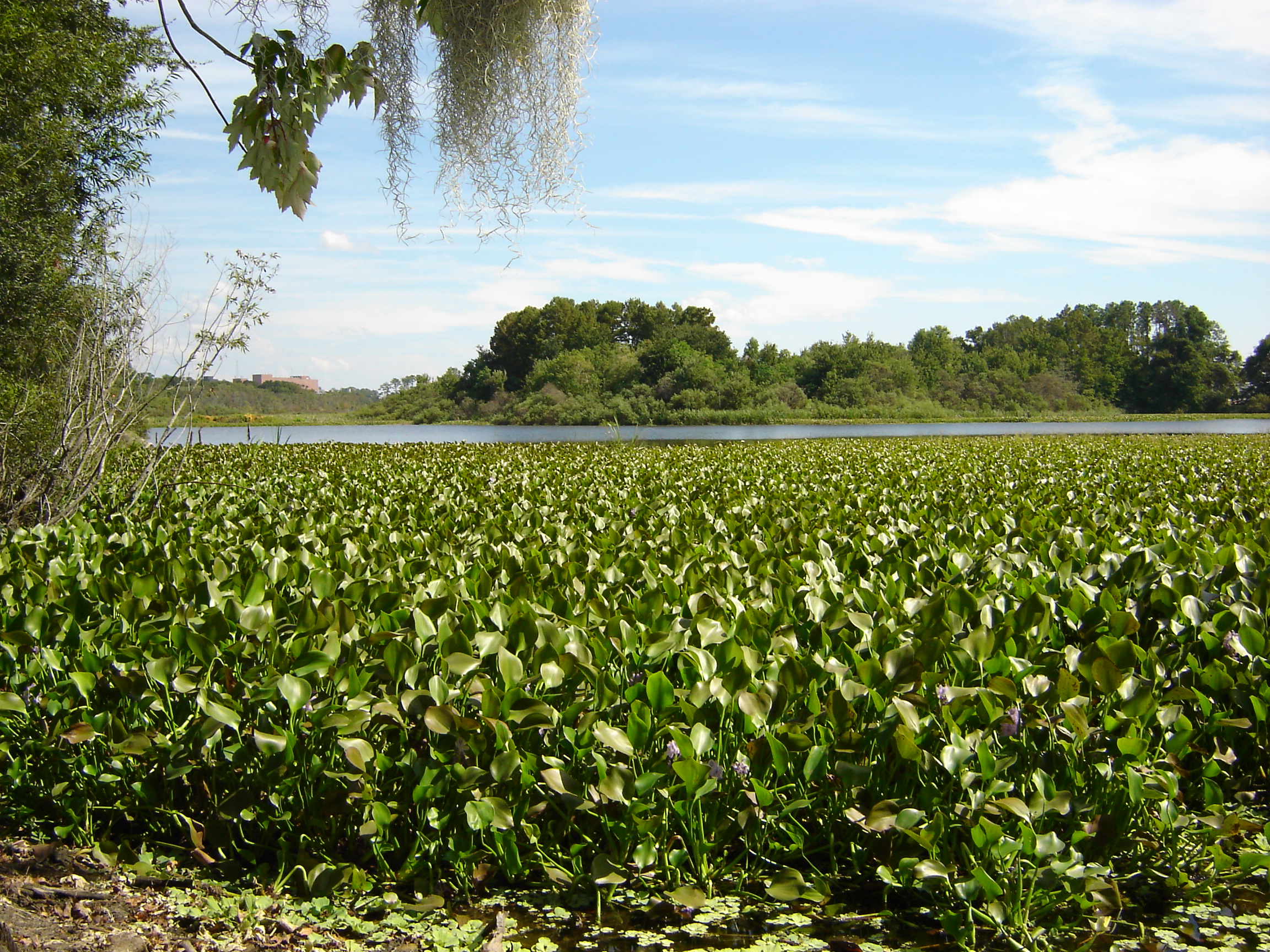 Most of the aquatic weeds that cause severe problems are from other countries and have characteristics which allow them to become serious problems in Florida's semi-tropical, shallow, nutrient rich waters. For example, in Florida, water hyacinth populations can double every 7-14 days. Because they have no natural enemies here, these plants can outcompete and displace native plants, adversely impacting both fish and wildlife habitats. When left unmanaged on Lake Okeechobee, water hyacinth displaced native bulrush and shaded out native submersed plants which are important habitat for fish, waterfowl, and other animals. Water hyacinth infestations also interfere with the nesting and feeding habits of the endangered Everglades snail kite, and in extreme cases can push over or uproot emergent vegetation in which kites build their nests. 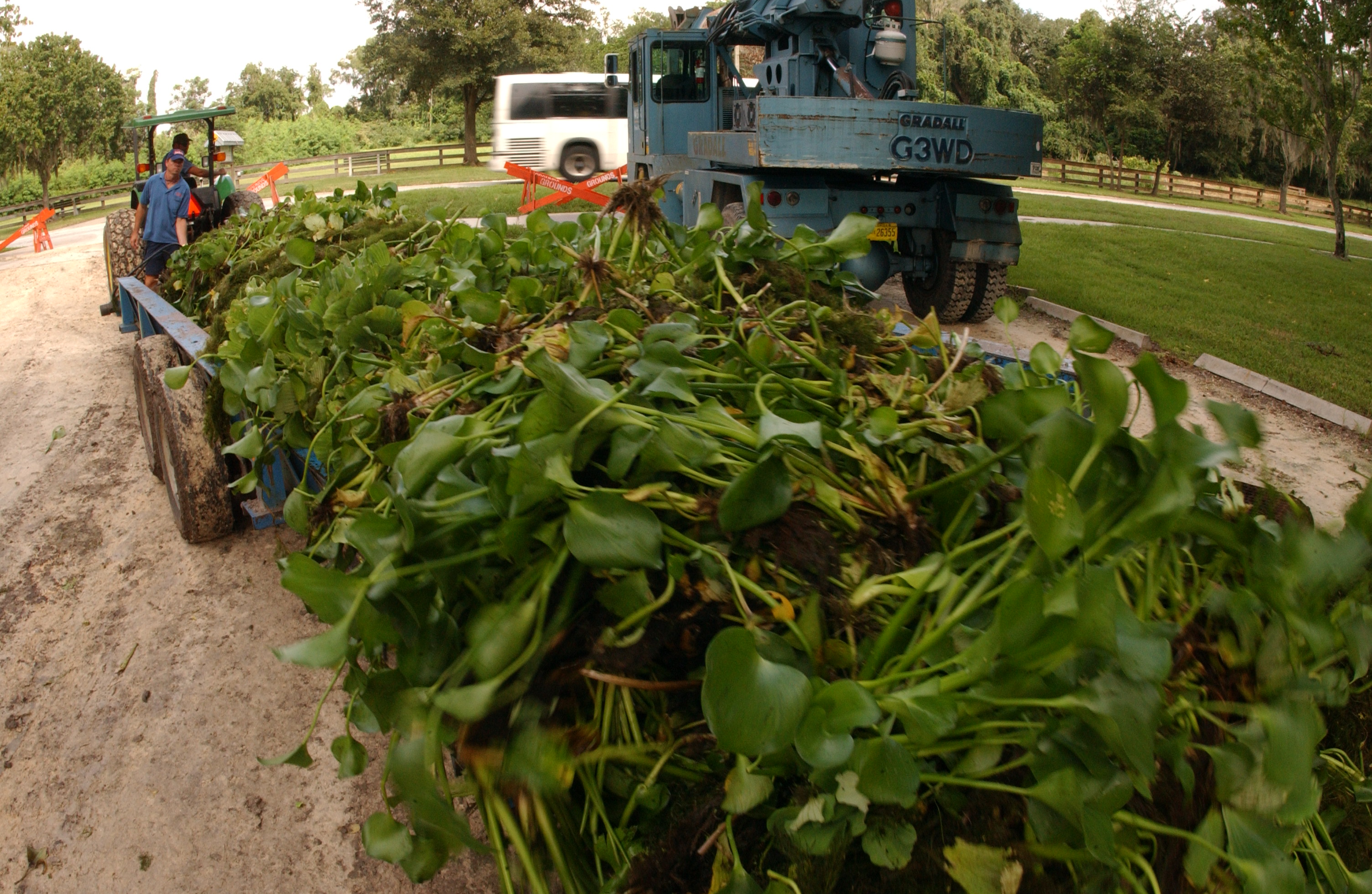 Organic material, like these plants, are sometimes physically removed, to prevent dissolved oxygen problems in the waterbody, caused by increased decomposition of the plant material.

The organic material deposited in lakes and rivers by aquatic weeds also has another impact. Organic material in water decomposes, or rots, just as it does on land. This process consumes dissolved oxygen. In water, only small amounts of oxygen are present, usually in the 3-9 parts per million (ppm) range. Fish usually require 4-5 ppm. Research efforts and many years of experience have shown that unmanaged invasive aquatic plants can overload a waterbody with organic material. When combined with other factors which naturally reduce the oxygen content of water (warm temperatures, cloudy days, and heavy rains), oxygen levels can be reduced to the point that fish become stressed and can die in large numbers. This is referred to as a “fish kill.” Maintaining invasive aquatic weeds at low levels reduces oxygen consumption from decomposing plants and allows oxygen to be generated by interchange with the air, and by allowing sunlight to reach other plants which produce oxygen in the water. On the other hand, spraying plants on a "crisis" basis (after they have grown to large infestations) can reduce oxygen levels.

It is also easier for aquatic plant managers to control small infestations of weeds. Under these conditions there is less likelihood that nearby beneficial aquatic plants will be adversely affected.

Greater Use of Our Waters

Lakes and waterways are valued for recreation, aesthetic beauty and economic benefit. Invasive, non-native aquatic plants which interfere with navigation, flood control, recreation, or fish and wildlife habitat must be managed to preserve these uses.

Water hyacinth and other invasive plants left unmanaged, or controlled only on a "crisis" basis, accelerate the transformation of a lake into a marsh. Research at the University of Florida (Joyce, 1985) has shown that water hyacinth can add up to four times the organic sediment to waterbodies when managed on a "crisis" basis than when managed on a "maintenance control" basis. This is because these plants naturally shed large quantities of plant material into the water, just as trees shed their leaves in the fall.

Less Use of Herbicide and Lowered Management Costs

Studies by Joyce, 1985 at the University of Florida also demonstrated that the amount of herbicide needed to control water hyacinths at low levels (less than 5% coverage) can reduce annual herbicide usage greatly. In a maintenance control program, even though herbicide applications take place more frequently, the overall amount of herbicide used is much lower than the amount that would be used to treat an out-of-control infestation.

Airboats are commonly observed on the state's waterways when managing aquatic plants. People are often concerned when they see these boats spraying herbicides in water. It is sometimes assumed that frequent, repeated herbicide treatments are adding large quantities of chemicals to Florida’s waterbodys. In fact, usually less than one percent (1%) of the spray applied is an active ingredient. The rest of the mixture is the water with which the herbicide is mixed. Research is constantly improving treatment techniques to insure that the smallest amount of herbicide necessary is used. In addition to environmental safety, using less herbicide keeps costs down as herbicides are extremely expensive. 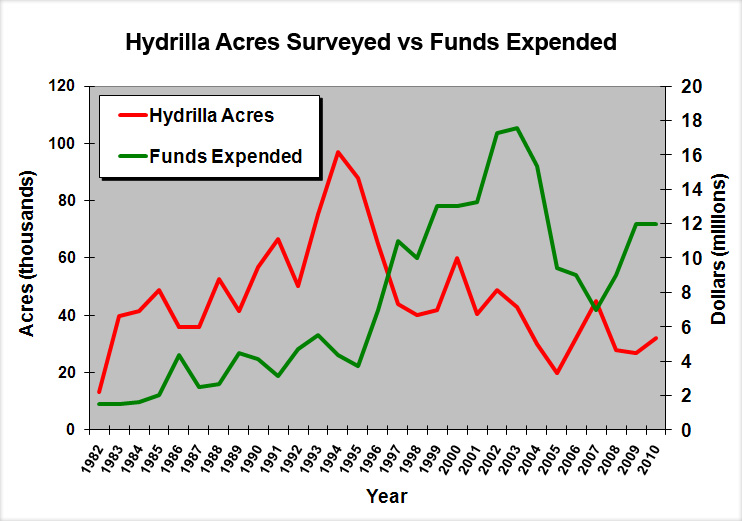 Maintenance control requires the use of much less herbicide to manage invasive plants at a low level, than when these plants are allowed to proliferate. This translates to a much lower annual cost. Fewer invasive plants present means fewer plants are sprayed, less herbicide is used, less labor is required, and costs are greatly reduced. That is the maintenance control strategy. There are many other examples such as the St. Johns River, Lake Okeechobee, and even small lakes and ponds where this approach has shown success.

Each waterbody, and each weed problem, have unique characteristics. By keeping problem plants at a low level, it is possible to schedule management efforts around fish spawning seasons, waterfowl or wildlife migrations and nesting patterns, manatee foraging needs, special recreational events such as bass tournaments, and even weather patterns. When a waterbody is maintained, flexibility exists to introduce new and innovative control strategies which will further reduce the use of herbicides.

The FWC maintenance control program involves local, state and federal agencies in the planning process, including the U.S. Army Corps of Engineers, the U.S. Fish and Wildlife Service, the Water Management Districts, and several county and city governments. Planning meetings are open to the public, and public input is encouraged. This process allows citizens to know that management activities have been reviewed and deemed necessary. Information is available regarding program goals and objectives and how they will benefit the public's use of the waterbody. Building trust, confidence and interaction with the public is a continuing objective of the aquatic plant management program and a primary driver of this web site. 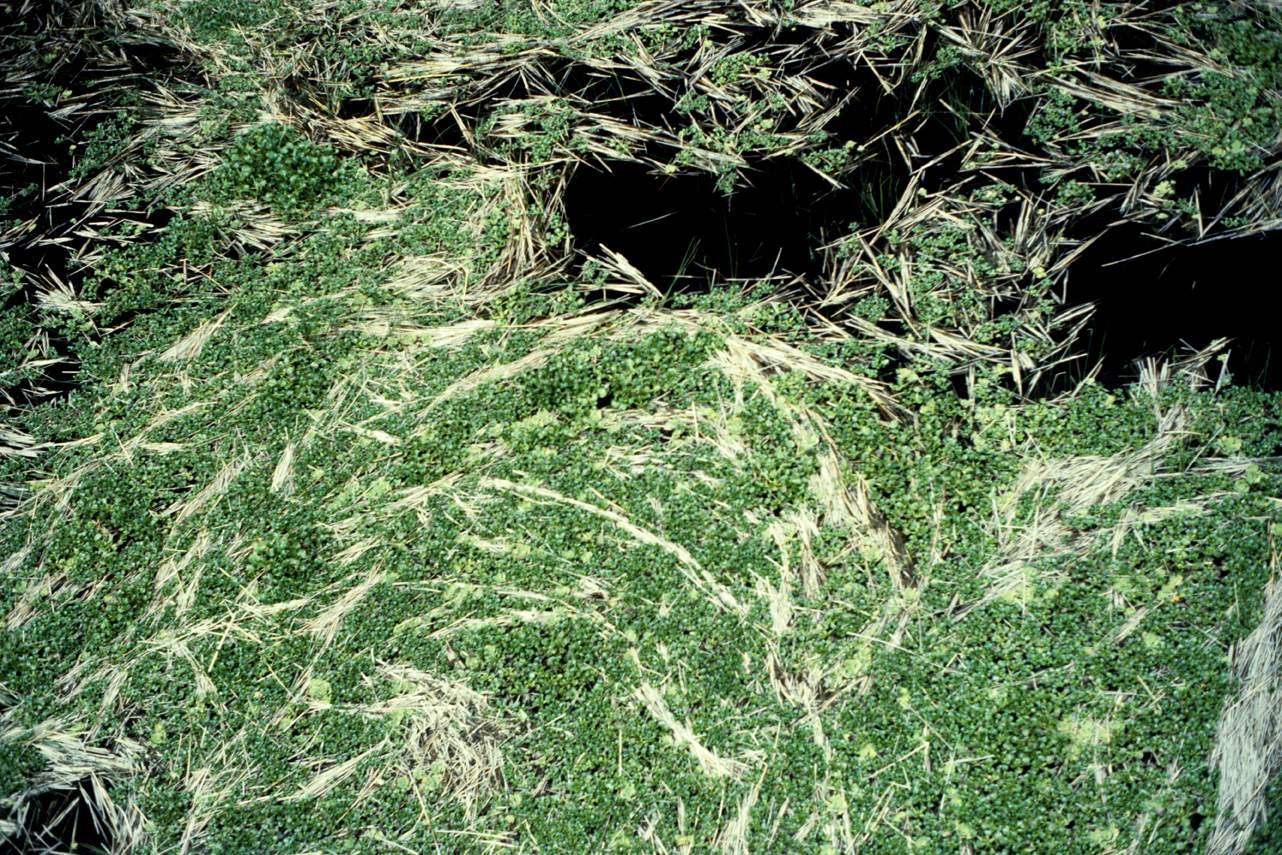 An aerial photo of bulrush (a native plant) being pulled up by a shifting mat of invasive water hyacinth on Lake Okeechobee.

Some floating plants can be removed mechanically and some biological control agents are effective at reducing seed production and plant vigor in Florida. However, herbicide applications remain the most effective method for establishing and sustaining maintenance control levels. This was confirmed in 1986 when a herbicide moratorium on Lake Okeechobee resulted in an expansion of water hyacinth from 2,000 acres to 8,000 acres in five months, despite continued mechanical harvester and biological control activity. In the final analysis, it took more than two years, $2 million and the control of 11,000 acres of water hyacinth to re-establish maintenance control of water hyacinth in Lake Okeechobee. (Food and Agriculture Organization of the United Nations, Fisheries Technical Paper 396, Pg. 136, T. Petr). 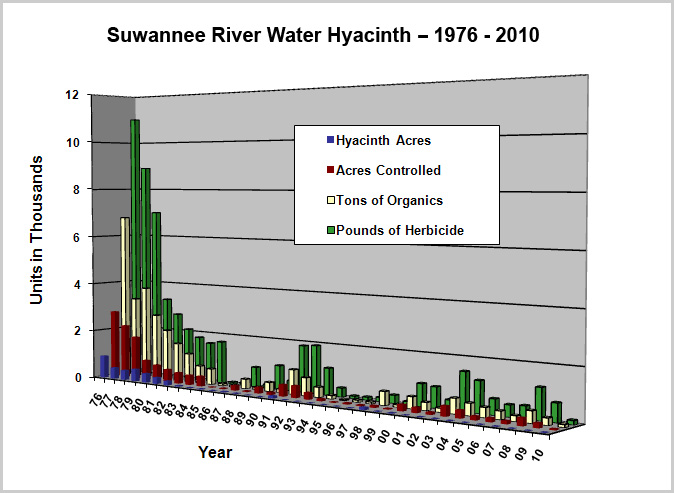 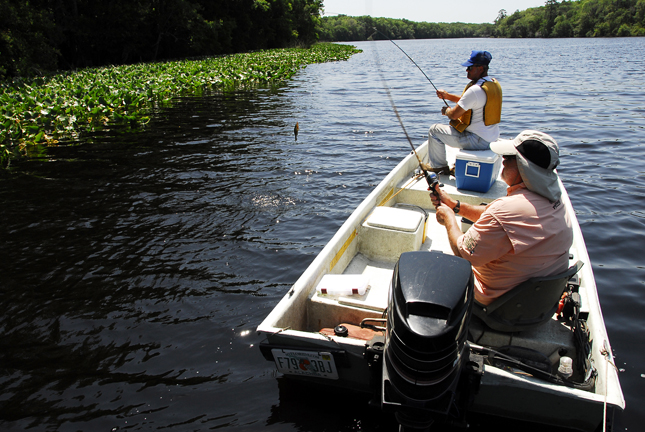 Native plants have returned to the shores and marshes of the Suwannee River, restoring fish and wildlife habitat.

Today, managers treat approximately 50 -150 acres of water hyacinth per year on the Suwannee River,or about 90% less than in 1974. Dead plant material (produced mostly by live plants shedding leaf, root and shoot material) was reduced by more than 95% under the maintenance control program. Native plants have returned to the shores and marshes of the Suwannee River, restoring fish and wildlife habitat. (Schardt, J.D. 1997. Maintenance Control. Pp. 229-243. In: Simberloff et. al. (eds.). Strangers in Paradise: Impact and Management of Nonindigneous Species in Florida. Island Press, Washington, D.C.)