The most common cause of fish kills is related to the depletion of dissolved oxygen in shallow waterbodies. Oxygen depletion may be caused in various ways: 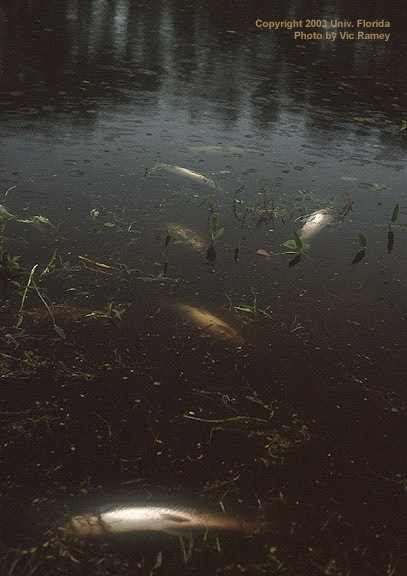 Signs of a fish kill

Some species of fish naturally die in large numbers after spawning or when they are stressed by unusual or harsh weather conditions.

When water or air temperatures fall below a critical level for a particular species (scientifically termed a lower lethal temperature), they will die. For example, humans can die due to hypothermia when their body core temperature falls below a critical level. Florida has a sub-tropical climate and often has mild winters. Exotic tropical fish have become established or extended their range further into north Florida. When we have record-setting cold temperatures, our water temperatures can rapidly fall below the lethal temperature for many species. This can result in large die-offs of tropical fish such as blue tilapia and suckermouth catfish, among others.

In addition to exotic fish, some of our native fish are also prone to cold weather-induced kills. Gizzard and threadfin shad often die during cold weather. In Florida, we also have the Florida subspecies of largemouth bass that has evolved in Florida's subtropical climate. Florida largemouth bass can die due to low water temperatures, while the "northern" largemouth bass survives. Marine species such as common snook, tarpon, and sea trout can also die, especially if they are located in shallow areas that experience rapid drops in water temperature.

Even if fish don't immediately die due to cold weather, they will often become stressed, making them more susceptible to illnesses such as bacterial and fungal infections. They may die or have temporary sores on their bodies.

Most fish kills are due to naturally occurring biological occurrences. Observations are critical in determining the cause of a fish kill. One should write down a description of all living and dead animals in and around the pond (i.e., crayfish, turtles, frogs). Record the number, size and species of dead fish as well as any unusual behavior of live fish, such as swimming near the surface or jumping onto the bank. The following table presents some causes of fish kills.

To learn more about naturally occurring fish kills, human induced fish kills, and what you can do if you observe a fish kill, see

A searchable database of reported fish kills in Florida is available from the Fish and Wildlife Research Institute of the Florida Fish and Wildlife Conservation Commission (FWC). Search for fish kill data by county or probable cause, or submit a fish kill report.