Many people are surprised to learn that fish and other aquatic organisms don’t use oxygen from water molecules (H2O). This is because the single oxygen molecule (O) is bound to the two hydrogen molecules (H2) and is not useable in this form. Instead, aquatic organisms depend on dissolved oxygen gas (O2), a colorless, tasteless and odorless substance that enters the water from plants and the atmosphere.

In aquatic environments, free-floating microscopic plants known as algae, and larger submersed plants (macrophytes), release oxygen directly into the water where it is used by animals and other organisms, including the plants themselves.

While all plants produce oxygen, some produce more than others. In the aquatic environment, a number of aquatic plant species have oxygenating capabilities.

Several species are especially popular among aquarium and pond enthusiasts.

Unfortunately, a few of them are non-native and can become invasive in Florida.

Oxygen from the Atmosphere

In addition to plant-generated oxygen, the earth’s atmospheric pressure is constantly pushing tiny molecules of dissolved-oxygen gas into the surface waters of our lakes, ponds, oceans, and swimming pools – even the glass of water on your kitchen counter. The process is known as diffusion. As oxygen gas is pushed into water, excess oxygen from the water is simultaneously being released into the air. Wind and wave action or mechanical aerators accelerate diffusion by creating more surface area for oxygen to enter the water.

Water’s unique ability to hold and release oxygen makes it possible for fish and other animals to breathe (respire) underwater. However, oxygen concentrations in aquatic environments are rarely stable. When the sun is shining and aquatic plants (including algae) are photosynthesizing at full capacity, oxygen is plentiful. However, after the sun sets, photosynthetic activity and, hence, oxygen concentration is greatly reduced. Usually there is a dissolved oxygen buffer in the water to last until morning, when the process begins again. However, if something alters the pattern, oxygen can be depleted. 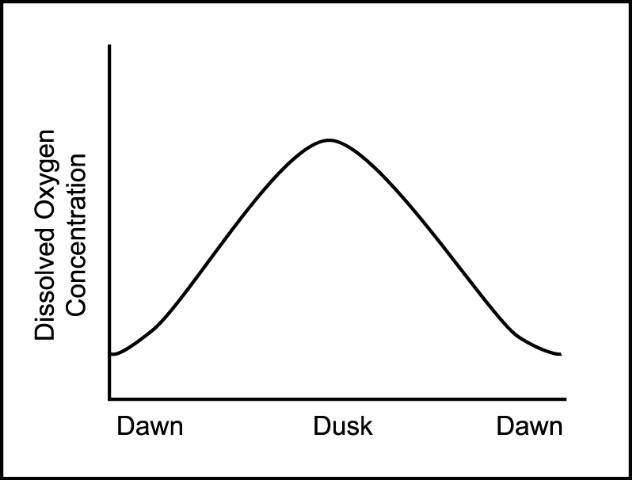 Oxygen levels in flux throughout the day

Weather patterns, particularly in Florida’s subtropical climate, can cause oxygen depletion problems. Several consecutive days of cloudy weather reduce the amount of sunlight available for photosynthesis by algae and plants. As the algae, plants, and animals continue to use the dwindling oxygen supply, oxygen levels dip below 2 mg/L. Fish and other animals become stressed, increasing the chances of illness or, if conditions last, death. A large number of fish can die overnight. This is commonly referred to as a fish kill. This usually happens in the early morning hours or just before dawn (4 to 6 am) and often during hot weather when there is less oxygen in the water to begin with.

Heavy rains can wash organic matter (leaves, twigs and grasses) into a waterbody and cause a chain reaction that uses up oxygen quickly. Once the debris is washed into the water, billions of microorganisms (including bacteria and zooplankton) begin to decompose the vegetation. If a large amount of organic material is introduced at once, the increased activity of the microorganisms can accelerate oxygen consumption. Dissolved substances from the decaying vegetation in the lake (or from wetlands surrounding the lake) can also leach into the water after a heavy rain and have a similar affect; as can wastes from animal feedlots or septic tank wastewater. For more on the effects of color and dissolved substances on water, see Florida LAKEWATCH Circular 108, A Beginners Guide to Water Management – Color.

Sometimes there can be a surplus of dissolved oxygen and at other times, it can drop dangerously low – so low that fish and other organisms will become stressed, sick, or even die (for example a fish kill). In Florida’s warm-water lakes, oxygen-related problems are among the most common causes of fish kills. Although disturbing to people, most fish kills are the result of naturally occurring processes. For optimum health, warm water fish – (those in Florida) generally require dissolved oxygen concentrations of five parts per million (5 ppm). While this amount of oxygen is available in most water bodies, it is never constant. Fish usually die at oxygen concentrations of 2 mg/L or less. For more information, see Dissolved Oxygen for Fish Production by Ruth Francis-Floyd.

Aside from photosynthesis, water temperature is probably the most influential factor in determining oxygen concentrations in water. A few examples:

For more on thermal stratification and the potential for “lake turnovers”, see Florida LAKEWATCH Circular 109, A Beginners Guide to Water Management — Oxygen and Temperature.

Extensive research has been conducted to document the relationship between the biological productivity of a lake and the amount of oxygen in the water.

As a result of this work, there are a few generalizations that can be made. For example, oligotrophic lakes seem to experience relatively small changes in oxygen concentrations over a 24-hour period. This can be attributed to the fact that lakes with low productivity experience less photosynthetic activity and also less respiration (due to the smaller number of aquatic organisms within the waterbody).

On the other end of the spectrum, more productive waterbodies, such as eutrophic and hypereutrophic lakes, have been found to experience large fluctuations in oxygen concentrations over a 24-hour period. This is attributed to the fact that lakes with lots of aquatic plants and animals tend to experience high levels of photosynthetic activity and respiration; there's simply a lot more going on within the system. These waterbodies also happen to have the greatest potential for oxygen-related problems.

*Excerpted from LAKEWATCH Circular 109, A Beginner's Guide to Water Management – Oxygen and Temperature

Other factors that can decrease dissolved oxygen in water

Large-scale loss of algae or plants can deplete oxygen in much the same way. This can be a problem in lakes where algicides or herbicides are used to eliminate unwanted vegetation. If algae or aquatic plants die quickly and sink to the bottom, decomposition increases, accelerating oxygen consumption, and a fish kill can result. During warm weather when dissolved-oxygen concentrations are already low, chances of such problems increase. This is why chemical treatments of excess vegetation in a waterbody should be staggered over time; so large amounts of plants do not die all at once. See Section 4 for more information on developing management plans.

Altitude is not really a factor in dissolved oxygen in Florida, as most of the state is barely above sea level. However, for lakes in northern latitudes (and higher altitudes), the amount of oxygen in a lake or waterbody decreases as altitude increases. This is because there is less atmospheric pressure at higher altitudes to push oxygen molecules into the water.