In 200 AD, prehistoric people living near Lake Okeechobee constructed the earliest-known canal in North America. According to archaeologists, early Native American societies such as the one living nearly 2,000 years ago in what is now known as Ortona, Florida, constructed canals for fishing and transportation. Canals constructed by Florida land developers during the twentieth century provided similar benefits for contemporary citizens.

Today, thousands of miles of canals and their water-control structures are carved into Florida's landscape, especially in the southeastern parts of the state. Canals are artificial waterways that modify existing rivers or streams; or are dug into wetlands or uplands for navigation, drainage and flood control, irrigation, access, and recreation. Florida canals range from a few feet to hundreds of feet wide, and from a few feet to as deep as 35 feet. 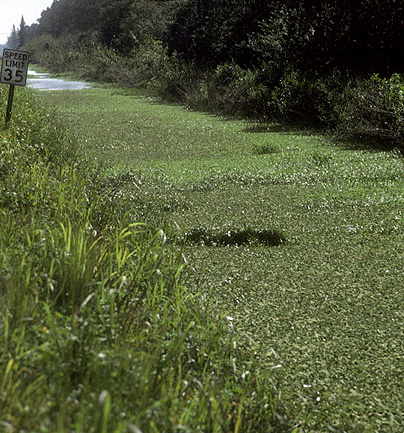 Management of both native and non-native plants in Florida’s canal systems is necessary because dense vegetation greatly decreases water flow and capacity in a canal system.

Canals provide many benefits—without them, the state from Orlando southward would be unable to accommodate the millions of residents and enterprises that now call south Florida home.

However, canals also present many challenges to aquatic plant managers who must keep waters flowing. Without regular and frequent management, aquatic plants would quickly clog these systems, rendering them useless for flood control, navigation, and recreation.

River and stream channels that have been widened, deepened, or straightened are forever changed. Altering water flow, bank slope, oxygen and light levels, and bottom composition and structure affects fish and wildlife as well as plant growth. Canals constructed in wetlands or uplands quickly fill with both native and non-native aquatic plants. Managers must decide how and to what extent aquatic plants should be managed to accommodate the functions of these artificially constructed waterways.

The Many Purposes of Canals 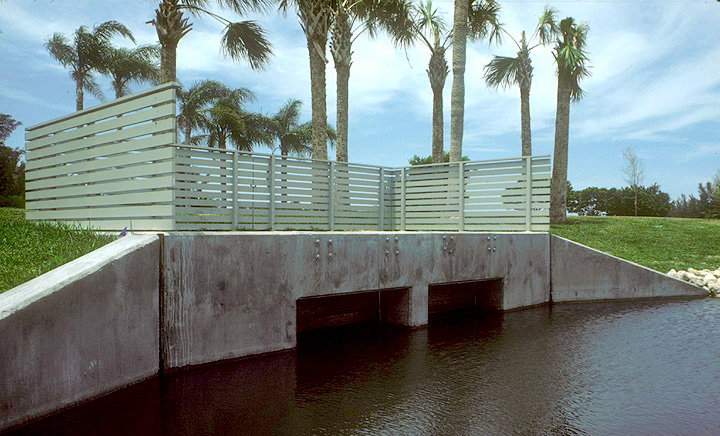 Culverts, like this one pictured in south Florida, are designed to conduct water underneath roadways or into canals. These passageways must be kept free of vegetation so water can move freely.

Florida is a frequent target for tropical storms and hurricanes from the Atlantic Ocean and Gulf of Mexico. These tropical cyclones may drop 20 inches or more of rain in a single day. Flood control has been an essential purpose for canals since several hurricanes struck southern Florida in the 1920s that claimed nearly 3,000 lives and caused $75 million ($850 million in 2011 dollars) in damages. Canals with large pumps and gates quickly collect and move stormwater away from populated areas.

Florida has a rich history of agriculture which boomed with the construction of canals that drained fertile land, controlled seasonal flooding, and provided reliable irrigation. Farmers can drain water from their farms during the wet season and retrieve stored water during the dry season. Major economic crops dependent on south Florida's water control systems include sugarcane (first planted in 1917), peanuts and potatoes (1920s); beans, tomatoes and peppers (1930s); rice (1950s); and St. Augustine grass (1950s). Major citrus groves moved south after devastating freezes in central Florida during the 1970s and 1980s. Cattle became a major industry in the area in the 1950s.

Navigation throughout Florida is facilitated by canal systems that provide navigable waterways for commercial and recreational boating.

Unlike central and northern Florida, the southern part of the state has relatively few natural freshwater recreation areas. Canals are home to a variety of freshwater game fish, offer thousands of acres of surface area, and are easily accessible for boat and shore fishing.

Residential canals like this one, common in south Florida, provide drainage and flood control. The extra elevation along the canal bank is created from spoil dirt and provides an added measure of flood protection.

Residential property in Florida has relatively greater real estate value when adjacent to canals. Canals provide boating access to coastal waters and to most of Florida's large public lakes and navigable waters. Canals which are privately owned provide valuable local taxes, part of which are used for plant-management activities in the canals. Residential canals provide drainage and flood control, and their spoil is spread next to the canals to raise the elevation of surrounding areas, providing an extra measure of flood protection. 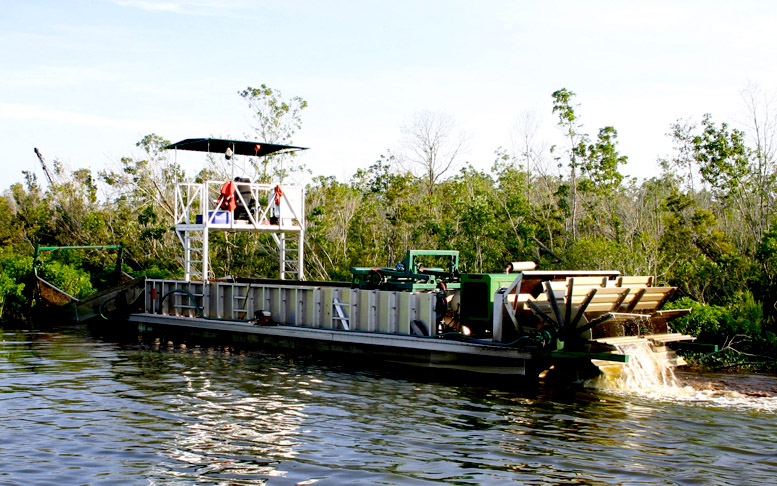 One drawback in using mechanical harvesters in canals: they work slowly and are difficult to maneuver in narrow spaces.

Virtually all canals in Florida are susceptible to serious weed infestations that interfere with navigation, flood control, boating, fishing, and other uses of canals. Management of both native and non-native plants in Florida's canal systems is necessary because dense vegetation greatly decreases water flow and capacity in a canal system.

Each year, millions of dollars are spent for aquatic plant management in Florida's canal systems by the state, by counties, by water management districts, by more than 200 special districts, and by farmers, ranchers and other private interests. There are many agencies which manage canals and other water systems in Florida

The capacity of a canal to move water depends on the size of the unobstructed volume where the water passes; the larger the volume, the greater the amount of water that can pass through. A canal that is largely obstructed with hydrilla has a reduced capacity to handle floodwaters.

Using mathematical equations, experts can predict the efficiency of a specific canal system, its ability to conduct water, and the amount of water that will overflow into neighborhoods, cities, and farmlands during times of rains, floods, and hurricanes. To keep canal systems functioning, managers must maximize their efficiency by keeping them free of vegetative obstructions. Plant managers use a variety of methods to control aquatic plants in canal systems.

Plant destroying and harvesting machines (described on the mechanical controls page) can provide immediate relief for clogged canals. However, harvesters work slowly and are restricted to the central channel. Sterile grass carp (are plant-eating fish used as a biological control for submersed plants in canals. However, the non-native grass carp must be confined, which is difficult in canals. The most efficient means of aquatic weed control in canals is the use of herbicides (described on the chemical control page).

Despite the adverse effects of various plant management techniques, maintaining the proper functioning of canals is essential in Florida.

Environmental and Management Expectations in Canals 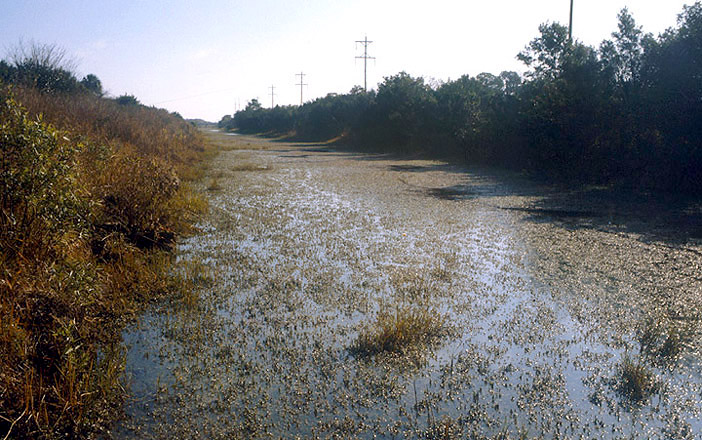 Virtually all canals in Florida are susceptible to serious weed infestations that interfere with navigation, flood control, boating, fishing, and other uses.

Very long and/or dead-end canals usually do not have adequate water circulation which leads to inadequate flushing and water turnover in many canals. Such conditions result in decreased dissolved-oxygen concentrations, increased pollution loading, decreased plant photosynthesis and growth due to turbidity, excessive accumulation of organic materials and sediments on the canal bottom, accelerated eutrophication, and negative impacts on animal communities. The dissolved oxygen concentration in canal water decreases as the distance from the canal inlet increases. Healthy dissolved-oxygen levels in water are essential to fish and other aquatic animals. Dissolved oxygen concentrations are related to the mean depth of the water in the canal. Canal water stratifies readily (forms temperature layers), does not circulate much, and exchanges little with the main body of water. Decomposing organic matter along the bottom also depletes the oxygen supply in the water. Some aquatic life can inhabit the shallow, more oxygenated, layers; however, when bottom waters are driven to the surface by weather events, aquatic life can be affected and fish kills may occur.

Pollution loading of canals occurs as a result of shoreline development. Septic seepage, lawn fertilizers, pesticides and effluent, and oil and gasoline from boats negatively impact canal water quality. Paved parking lots and streets prevent land areas from absorbing polluted runoff, so pollution-laden rainwaters drain directly into canal systems. Inadequate flushing prevents the canal system from diluting and dispersing pollutants to the receiving waterbody. Contaminants may accumulate on the water surface or build up in the sediment.

Most canals are virtually closed bodies of water that serve as nutrient traps, and the accumulation of decaying organic matter on the canal bottom impedes healthy biological production. Native wildlife, including benthic (bottom-dwelling) animals, fish, birds and mammals are frequently abundant in newly constructed canals. The advent of hot weather can result in increased temperatures and dramatic decreases in dissolved oxygen concentrations with heavy mortality of benthic organisms and fish resulting. In cooler weather, animals may recolonize as dissolved oxygen concentrations increase.

Many of the environmental and water quality problems posed by canals are the result of outdated concepts and methods. In the past, canal systems were designed to emphasize advantages for development rather than the ecosystem. Lacking sufficient understanding of Florida's physical, chemical, and ecological environment, canals were quickly constructed as deep, box-like channels with steep sides, not taking into account water circulation, wind patterns, wildlife uses, and the ramifications of excessive or insufficient depth. In response to growing concerns over the ecological impacts of canals, researchers have developed a variety of recommendations for the modification of existing canal systems and the construction of new ones.