People use common names or scientific names when referring to particular plants (and animals). Both naming conventions serve a purpose.

Scientific names, on the other hand, are unique plant and animal names used across the world by scientists and other professionals regardless of the language they speak or write, because scientific names are always Latin or Latinized words. They are standardized, using the same name for the same organism and are always used in published research. Scientific names cannot be changed except by international scientific agreement.

You don't have to be a scientist to use scientific names. Scientific names reduce confusion and make communication much more certain. 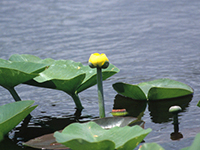 In most of Florida, the floating-leaved plant Nuphar advena is also known by several common names: bonnet, cow lily, and spatterdock. This species is known by anglers to attract a variety of fish. Think how confusing it can be to discuss fishing if the plant's common name varies from county to county and state to state. Think how confusing it can be if you and your neighbors on the lake all have different names for the same plant. 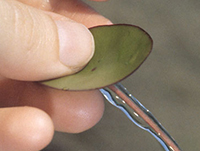 In some places, our cattails are called bulrushes. Our bulrushes are their club rushes; their rice grass is our cut grass. And often the same common name is used for different plants.

Furthermore, sawgrass is not a grass—it is a sedge. And bald-rushes, beak-rushes, bulrushes, club-rushes, lake rushes, spikerushes and star-rushes are not true rushes but sedges. (In fact, the only true rushes in Florida are the bog rushes of the genus, Juncus.) Common names vary in other ways too. Plant nurseries, garden centers, aquarium shops, and other plant retailers often assign popular common names to plants they sell. It's easier to sell "watershield" than Brasenia schreberi. 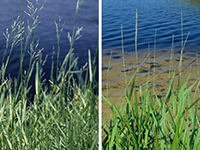 Panicum repens (at left) is a non-native invasive plant. Panicum hemitomon (at right) is a desirable native plant.

A scientific name is used by botanists, growers, plant managers, and others to avoid the confusion caused by common names. Professional plant taxonomists assign a unique scientific name to each plant. The naming system was invented by the Swedish botanist Linnaeus in the 1700s. It is based on the science of taxonomy, and uses a hierarchical system called binomial nomenclature.

Taxonomy is the classification of organisms. Plant and animal taxonomy is arranged in a hierarchy, from the broadest level of phylum down to the most specific, species:
– Phylum or Division
– Class
– Order
– Family
– Genus
– Species

A species is a group of individuals that do not successfully interbreed with individuals of other groups.

A genus is a group of closely related species. Species within a genus can look alike or vastly different. It is not advisable to make generalizations about a plant’s invasiveness based on genus alone. One species of a genus may be greatly beneficial while another species of the same genus may be an invasive nuisance.

In common names, the words are not capitalized unless a word is a proper noun. For example: maidencane, bulrush, water hyacinth, Florida pondweed, duckweed and hydrilla.

A scientific name has two (or sometimes more) parts. The first part is the genus name and the second part is the species. For example, Potamogeton floridanus is the scientific name for a species of pondweed. Potamogeton is the genus and floridanus is the species. Potamogeton illinoensis is a different species of pondweed. By using scientific names containing both genus and species, people can be very sure of the species they are referring to. The term “Eleocharis spp.” refers to all 150 species in the Eleocharis genus. Naming may become even more complex by further classifications such as subspecies and varieties.