Non-native plants, also referred to as exotic or alien, are plants that have been introduced to an area from their native range, either purposefully or accidentally. The term non-native usually refers to plants from other countries, regions, or continents. Water hyacinth (Eichhornia crassipes) comes from South America. Melaleuca (Melaleuca quinquenervia) comes from Australia. However, non-native can also mean plants from another region within the same country. Smooth cordgrass (Spartina alterniflora), a desirable native plant on the U.S. Atlantic coast, is invasive on the Pacific coast, covering oyster beds and other vital habitat.

Approximately 1,400 of Florida’s plants are non-native in their origin. Most non-natives do not cause problems and support human health and economic interests such as crop production and landscaping. These plants are well managed by those who grow them. Problems are often in highly disturbed areas such as roadsides or along utility corridors. Based on the Florida Exotic Pest Plant Council’s (FLEPPC) 2017 List of Invasive Plant Species, about 11% of the nearly 1,400 exotic species introduced into Florida have become established outside of cultivation and are causing problems. About 6% (79) are considered to be invasive.

“…a species that is non-native to the ecosystem under consideration and whose introduction causes or is likely to cause economic or environmental harm or harm to human health.”

The National Invasive Species Information Center says “…these plants are characteristically adaptable to new habitats, grow aggressively, and have a high reproductive capacity. They are often introduced to a new location without the environmental checks and balances such as seasonal weather, diseases, or insect pests that kept them under control in their native range. Their vigor combined with a lack of natural enemies often leads to outbreak populations.”

Further discussion on what is meant and what is not meant by invasive species is provided by the Invasive Species Advisory Committee (ISAC) Invasive Species Definition Clarification and Guidance White Paper (2006) .

According to FLEPPC , “These population explosions can have catastrophic effects, out-competing and displacing the native plants and disrupting naturally-balanced native plant communities.” Destruction and replacement of our native plants by invasive species has several significant consequences. Wildlife that depends on native plants is often unable to adapt and may be forced to leave the area or die out. Invasive aquatic plants can completely fill a water body, driving fish and wildlife from the area. FLEPPC says “This reduction in biodiversity can adversely impact wildlife and alter natural processes such as fire frequency or intensity and water flow.”

Aquatic invasive plants are especially troublesome in Florida where they can impede navigation and flood control, disrupt recreational water use, dramatically reduce dissolved oxygen leading to fish kills and create breeding grounds for mosquitoes. Control of invasive plants in Florida’s natural areas and waterways is expensive, costing millions of dollars each year.

The term “noxious weed” is used for state and federally regulated invasive plants. A noxious weed is defined in the Plant Protection Act of 2000 as

“. . .any plant or plant product that can directly or indirectly injure or cause damage to crops (including nursery stock or plant products), livestock, poultry, or other interests of agriculture, irrigation, navigation, the natural resources of the United States, the public health, or the environment.”

Plants on the Federal Noxious Weed List are designated by the Secretary of Agriculture or the Secretary of the Interior. Designated noxious weeds possess one or more invasive characteristics. They are difficult to manage; parasitic; a carrier or host of deleterious insects or disease; and being non-native, are new to, or not common to the U.S. or parts thereof. Listed plants are closely regulated and “prohibited or restricted from entering the United States” and “subject to restrictions on interstate movement within the United States.”

Florida Statute 369.20, The Florida Aquatic Weed Control Act , says “The Fish and Wildlife Conservation Commission shall direct the control, eradication, and regulation of noxious aquatic weeds and direct the research and planning related to these activities, as provided in this section, so as to protect human health, safety, and recreation and, to the greatest degree practicable, prevent injury to plant and animal life and property."

FLEPPC's List of Invasive Plant Species is updated every two years by the FLEPPC Plant List Committee. The List is not a regulatory list. Only those plants listed as Federal Noxious Weeds, Florida Noxious Weeds or in local ordinances are regulated by law. FLEPPC encourages use of the List for prioritizing and implementing management efforts in natural areas, for educating lay audiences about environmental issues, and for supporting voluntary invasive plant removal programs.

How Do Invasive Plants Get Here?

Non-native, invasive plants find their way here through a variety of pathways

The Chinese tallow tree (Sapium sebiferum ), was sold widely as an ornamental before it was discovered to be invasive in some of Florida's wetlands. Thousands of Chinese tallow trees have spread on their own in Paynes Prairie Preserve State Park near Gainesville, and much money and labor are now spent controlling them.

Hydrilla (Hydrilla verticillata ) was introduced as an aquarium plant and sold in pet stores. Hydrilla fluorishes here, now infesting tens of thousands of acres in Florida public waters. It has also spread to at least 30 states, as far away as Massachusetts and California. Hydrilla requires continuous management with herbicides and machines. Since 1980, more than $275 million have been spent managing this single species in Florida’s public lakes and rivers to conserve their uses and functions.

How Do Plants Spread? 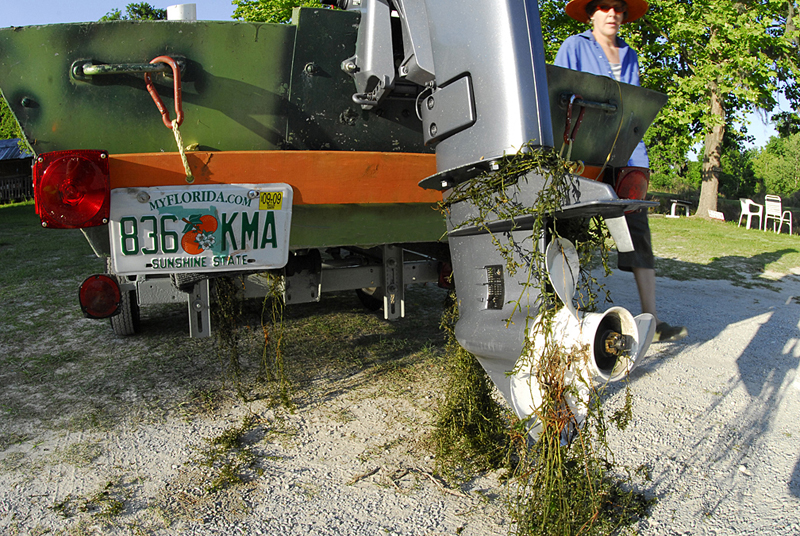 Always remove plant matter from boats and trailers after use; some invasive plants can spread from a small fragment or piece of plant that has broken off and been introduced into a new waterbody.

Flowering plants produce seeds. Some aquatic plants even produce flowers and are pollinated under water. Ferns produce large numbers of tiny spores. Depending on the plant, its location, and other circumstances, plants may spread when

One of the most difficult things a management agency must do is predict which non-native plants might become invasive and which will not. Controversies exist among government agencies, environmental organizations, scientists, and those with an economic interest in new plants (ornamental plant growers or importers, and those seeking crops to produce biofuels).

To that end, the University of Florida/Institute of Food and Agricultural Sciences (IFAS) developed a working group of scientists who provide consistent recommendations concerning the use of non-native plants in Florida.The IFAS Assessment of Non-native Plants in Florida’s Natural Areas and the IFAS Invasive Plants Working Group were created in response to growing awareness of the threat posed by non-native invasive species.

The Florida Exotic Pest Plant Council (FLEPPC) is a non-regulatory organization of plant management professionals who assess the threat of Florida's non-native plants and categorize them according to their invasiveness. FLEPPC defines Category I plants as "invasive exotics that are altering native plant communities by displacing native species, changing community structures or ecological functions, or hybridizing with natives." In 2017 in Florida, 79 non-native invasive plants met these criteria.

The Aquatic Plant Management Society (APMS) defines aquatic plant control as “techniques used alone or in combination that result in a timely, consistent, and substantial reduction of a target plant population to levels that alleviate an existing or potential impairment to the uses and functions of the water body.” Levels of control can range from no attempt to control to an ongoing continuous effort of maintenance control, keeping the invasive plant population at the lowest possible level while conserving or enhancing native plants. Complete eradication is difficult, but can be achieved if invasives are detected early and treated aggressively before they proliferate throughout natural areas. See A Manager’s Definition of Aquatic Plant Control for a detailed discussion of level of control, desired outcomes, constraints and expectations. The Florida Aquatic Plant Management Society is the Florida chapter of the APMS.

Aquatic plant managers use several control methods depending on the plant and current conditions in its habitat:

Stewardship: What Can We Do?

The University of Florida has educational tools about aquatic plants, their identification, and their biology. This website has “Conservation Guidelines” to aid in aquatic plant management.