Sometimes what appear to be islands rising out of the water are actually drifting masses of peat, mud, and plants. In extreme cases, these "islands," which range in size from a few feet across to hundreds of acres, can contain trees more than 50 feet tall and 8-12 inches in diameter. Though the following information pertains to tussocks and floating islands in Florida, these phenomena are world-wide, witnessed in such places as Argentina, Australia, Finland, India, Japan, Kenya, and Papua New Guinea. Aquatic plant managers call these islands tussocks, floating islands or floating forests. When freely drifting in Florida waterways, they can be extremely expensive in terms of property damage, lost income, and management costs. 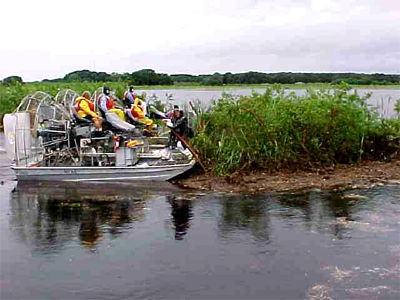 Tussocks and floating islands are a product of the natural aging process of water bodies and probably have always been a part of Florida’s shallow lakes. Historically, their occurrence was kept in check by periodic drought and fire that controlled them within lake margins, or occasional floods that deposited them high in the uplands or in downstream marshes. Nowadays, water levels in most of Florida’s public lakes are manipulated by structures such as weirs, dams, or levees. These manipulations eliminate the extreme high and low water events that historically suppressed tussock and floating island formation. For example, the Kissimmee Chain of Lakes that once fluctuated more than 10 feet is now restricted to a variance of just a few feet each year. 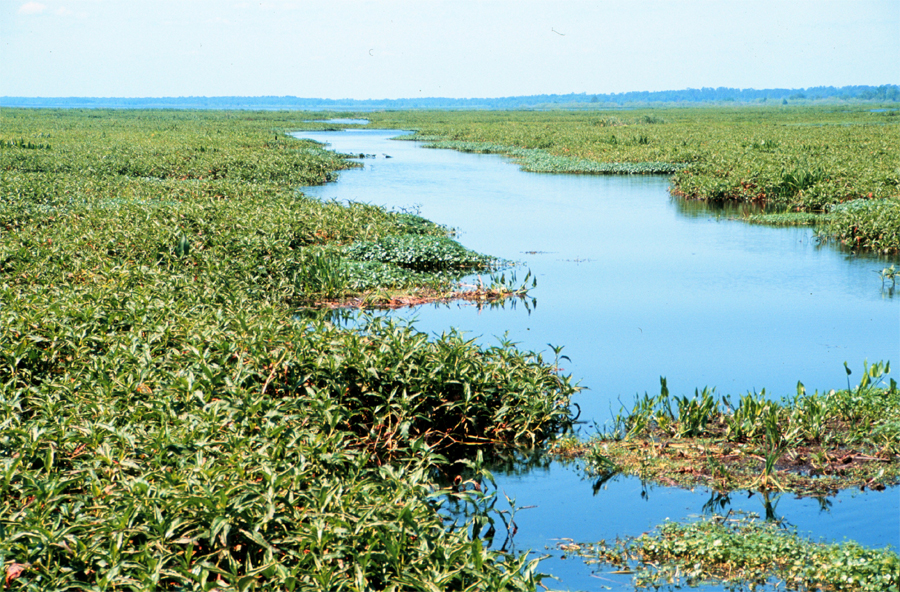 Tussocks are rafts of herbaceous plants that form in a number of ways. They can be controlled using herbicides that kill the plants, and the entire mass will soon after sink to the bottom.

If not managed, floating invasive plants such as water hyacinth and water lettuce, and even native floating plants such as frog’s bit, can form large rafts that act as a substrate for emergent plants to colonize. Emergent plants like primrose willow tie the rafts together below the surface with their roots, and above the surface with stems and branches.

Native emergent species such as pennywort and smartweed grow from the shoreline to form mats across the water surface. If the mats become large enough, wind and wave action can tear them loose, generating floating tussocks. The non-native Cuban bulrush (Oxycaryum cubense), a grass-like sedge, sends long runners among and over other emergent plants and can eventually displace them with a floating tussock of Cuban bulrush.

As water levels increase after drawdowns or droughts, masses of spongy plants like cattail and pickerelweed can pull loose from shallow soft mud flats. In 2003-2004, thousands of acres of such tussocks were drifting in Orange Lake and Lakes Hancock and Apopka.

Floating islands can form in the same manner as tussocks. They are comprised of aquatic and sometimes upland plants, and herbaceous and woody plants. Most important, they are characterized by suspended masses of organic deposits like peat and mud that vary from a few inches to a few feet thick. In some cases, the sediments are compact or fibrous enough that the emergent plants, whose roots are interwoven into the sediments, pull as much as several feet of organic material with them to the surface as lakes re-fill. Such was the case with hundreds of acres of floating islands drifting in Hernando Pool of the Tsala Apopka lake / marsh system, and Lakes Okahumpka and Runnymeade. Simply killing the vegetation on these floating islands will not eliminate them. The mud, peat, and woody material continue to float and the cycle repeats. The nature of floating island formation dictates that they must be dismantled to be controlled. 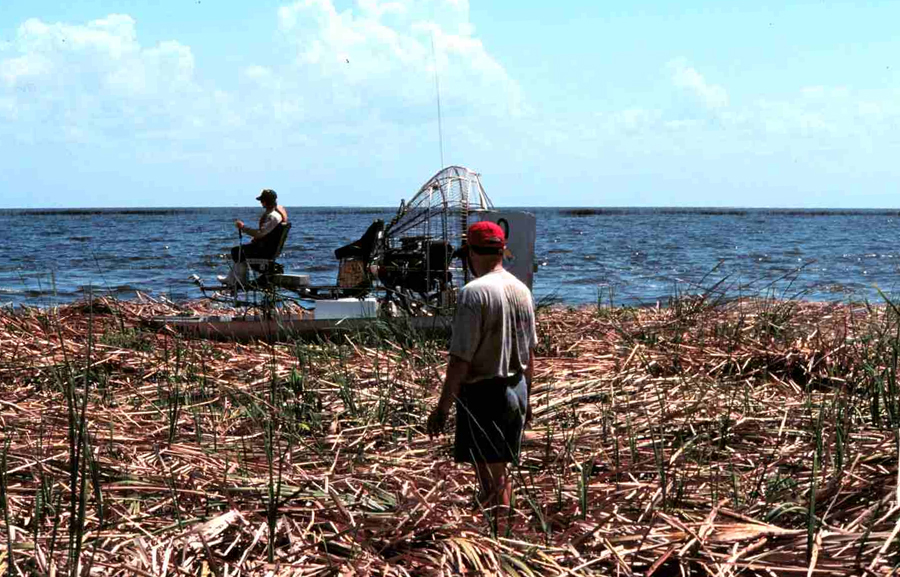 Portion of floating mass of uprooted and compacted submersed and emergent plants on Lake Okeechobee. The mass was several feet thick, up to several hundred feet wide, and several miles long.

Occasionally, storm winds rip up vegetation. For example, in Lake Istokpoga during the 1993 “Storm of the Century,” and in 1994 on Lake Okeechobee, rapid water-level increases and wave action tore plants loose and shredded them. The dead vegetation can be so compacted (often several feet thick and substantial enough to walk on) that it continues to float. As decomposition occurs at the surface, the soil supports a new crop of aquatic and wetland plants whose roots help hold the mats together. In the case of Lake Okeechobee, a subsequent drought lowered the water level, and the floating island (approximately fifteen miles long and several hundred feet wide) settled and attached to the bottom to form a berm that hinders water exchange between the main body of the lake and the adjacent marsh.

In lakes with high organic content in the sediments, gasses can build up and lift small patches of decomposing fibrous material and peat to the surface. These patches coalesce along shorelines or emergent vegetation boundaries and are eventually colonized by wetland and even upland plant species. This is especially prevalent in Lake Tsala Apopka where patches of spatterdock (Nuphar advena) rhizomes routinely rise to the surface with attached peat and muck sediments.

When lake bottoms with high organic (especially peat) deposits are exposed for prolonged periods, the sediments dry out. If the water level increases too rapidly for the sediments to resaturate, several feet of the sediment layer, especially highly buoyant peat, can rise to the surface, bringing with it overlying aquatic, wetland, and upland plants.

Tsala Apopka is a 19,000-acre marsh/lake system on the eastern side of Citrus County. Much of the system is only a few feet deep and approximately 80% is covered by emersed and submersed aquatic plants. Water-control regulations and structures and encroaching development prevent periodic drying, fires, and flooding that once naturally suppressed tussocks and floating islands. The Florida Fish and Wildlife Conservation Commission (FWC) Invasive Plant Management Section provides funds to maintain navigation trails that connect major open-water pools to each other and to public boat ramps. Citrus County funds shoreline boat trails that lead from private residences to the state-funded navigation trails. 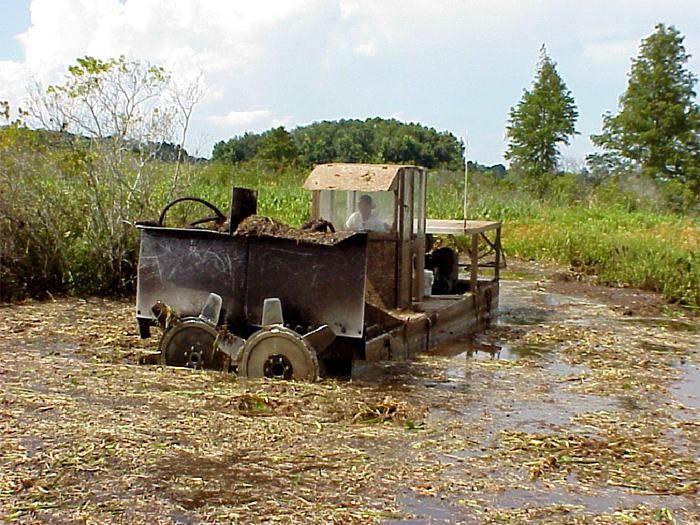 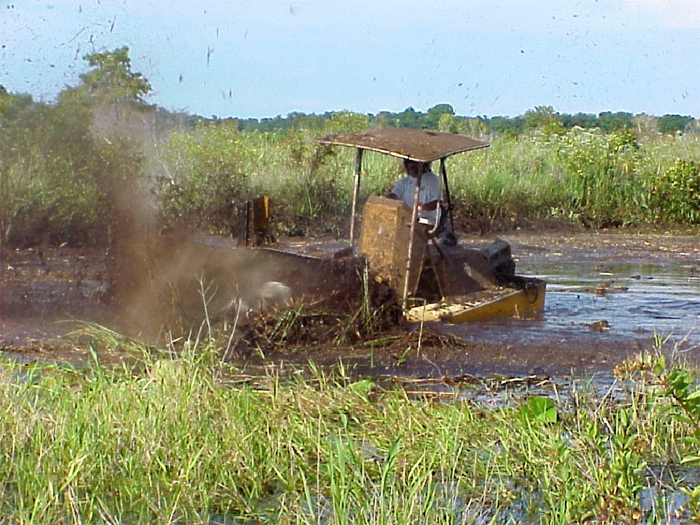 Shredding and returning floating island material to bottom from where it arose on Tsala Apopka. 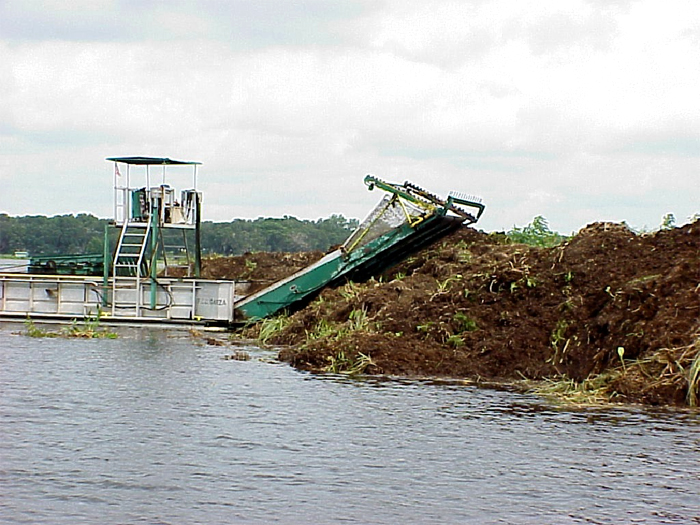 Water levels rose in just a few weeks to near-record highs in 2003 after many of the shorelines and shallow marshes had dried during the late 1990s drought. Much of the bottom covered for decades with emersed vegetation and small trees rose to the surface, bringing with it 2 to 3 feet of peat and mud. Problems were most notable in Todd and Dodd Lakes in the northern-most Hernando Pool of the lake / marsh system. Nearly 300 acres of floating islands that arose from the eastern, mostly unpopulated side of the lakes drifted toward the western, populated shore, blocking navigation and boat trails and stranding people in the lake, as winds shifted the islands during the day.

In extreme cases, a rapid-water level increase combined with severe wind and wave action can break loose wetland and upland vegetation growing on floating mats attached to the shoreline for years. Examples are the floating forests (with trees up to 50 feet tall) drifting in Lakes Pierce, Marion, and Apopka. These resulted after a series of hurricanes crossed central Florida in 2004.

Tussocks and floating islands can be extremely problematic if they block public access, hinder flood control, or impair navigation. Imagine installing a new dock or planting vegetation for fish and wildlife habitat, only to have a two-acre, 10-foot tall mass of cattails wash up to your shoreline and attach to the bottom; or finding an 18-acre floating "forest" with 50-foot-tall trees in your back yard after Hurricane Frances blows over Lake Pierce—a forest that bothered no one when it was attached to the unpopulated eastern shore of the lake; or waiting four years for a drought to end and water to return to Davis Lake, only to see nearly 40% of the 250-acre bottom pull loose and float to the surface in 12 feet of water.

Tussocks and floating islands may not be new, but the need for their large-scale management is. Throughout the 1990s, the Department of Environmental Protection's Bureau of Invasive Plant Management (BIPM) spent an average of $300,000 annually to manage all native plants, including tussocks and floating islands. From 2004-2006, the bureau spent more than $18 million strictly for controlling tussocks and floating islands. Today, the FWC Aquatic Habitat Conservation and Restoration Section (AHCRS) uses restoration funds to remove organic deposit build-up, tussocks, or floating islands when they cover or degrade fish and wildlife habitat in high-priority waters. These masses are often comprised of native plants,  so resource managers charged with controlling invasive exotic plants are reluctant to remove them unless they pose economic or public safety hazards or are damaging to beneficial plant and animal habitat. See Section 4 for decision criteria that plant managers must consider when planning to manage tussocks and floating islands.Tussock management projects are extremely costly and often divert funds from previously planned habitat enhancement and muck-removal projects. See Managing Tussocks and Floating Islands for a look at integrated management of these masses.

Although often problematic, tussocks and floating islands also offer some ecological benefit. They provide habitat for animals (marsh rabbits and alligators) and potential rookeries for birds. Read a colorful historical account of floating land masses in Florida, The Islands the Alligators Build, written by Frank M. Chapman in 1894.