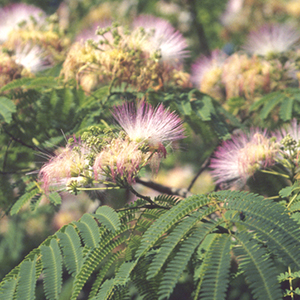 Originally from China, Mimosa or Silk tree was introduced to the United States in 1745 and cultivated since the 18th century primarily for use as an ornamental. Mimosa remains a popular ornamental because of its fragrant and showy flowers. Due to its ability to grow and reproduce along roadways and disturbed areas, and its tendency to readily establish after escaping from cultivation, mimosa is considered a Category II invasive by Florida’s Exotic Pest Plant Council.

Mimosa is a deciduous, small to medium-sized tree that can grow 20 to 40 feet tall. It is a member of the legume (Fabaceae) plant family and is capable of fixing nitrogen. The bark is light brown and smooth while young stems are lime green in color, turning light brown and covered with lenticels. Leaves are alternately arranged and bipinnately compound (6 to 20 inches long), having 20 to 60 leaflets per branch. The leaf arrangement gives mimosa a fern-like or feathery appearance. Mimosa flowering occurs from May through July. Pom-pomesque flowers are borne in terminal clusters at the base of the current year’s twigs. The flowers are fragrant and pink in color, about 1½ inches long. Fruits are flat and in pods, a characteristic of many legumes. Pods are straw-colored and 6 inches long containing 5 to 10 light brown oval-shaped seeds about ½ inch in length. Pods typically persist on the plant through the winter months.

Mimosa reproduces both vegetatively and by seed. Seeds require scarification in order to germinate. This characteristic allows the seed to remain dormant for many years. Normally seeds are dispersed in close proximity of the parent plant; however, seeds can also be dispersed by water. Wildlife may also contribute to the spread of mimosa through the ingestion and excretion of the seeds. Vegetative reproduction occurs when trees are cut back, causing quick resprouting and regrowth.

Mimosa is a strong competitor in open areas or forest edges due to its ability to grow in various soil types, ability to produce large amounts of seed, and its ability to resprout when cut back or damaged. Mimosa reduces sunlight and nutrients available to desired species because of the denseness of the stand. An opportunist, mimosa will take advantage of disturbed areas, either spreading by seed or germinating in contaminated soil. Mimosa is often seen along roadsides and open vacant lots in urban/suburban areas and can become a problem along banks of waterways, where its seeds are easily transported in water.

The first step in preventative control of mimosa is to limit planting and removal of existing plants within the landscape. If possible, removal should occur before seeds are produced. Care must be exercised to prevent seed spread and dispersal during the removal process.

Mimosa can be controlled using a variety of mechanical controls. Power or manual saws can be used to cut trees at ground level. Control is best achieved at flowering before seed production. Cutting is an initial control measure and will require either an herbicidal control or repeated cutting for resprouts. Cutting is most effective when trees have begun to flower to prevent seed production, but may require repeated cuts or an herbicide application to control sprouting. In the case where herbicide use is impractical, girdling can be effective on larger trees. Make a cut through the bark encircling the base of the tree, approximately six inches above the ground, ensuring the cut goes well below the bark. This will kill the top of the tree but the tree may resprout and require a follow-up treatment with an herbicide. Hand pulling will effectively control young seedlings. Plants should be pulled as soon as possible to prevent maturation. The entire root must be removed since broken fragments may resprout.

There are no known biological control agents for the control of mimosa.

Mimosa seedlings and small trees can be controlled by applying a 2% solution of glyphosate or triclopyr plus a 0.25% non-ionic surfactant to thoroughly wet all leaves. Systemic herbicides such as glyphosate and triclopyr can kill entire plants because the chemicals travel through a plant from the leaves and stems to the actively growing roots. Triclopyr is a selective herbicide for many broad-leaved plant species and should be considered for sites where native or other desirable grasses are meant to be conserved.

The cut-stump and basal bark herbicidal methods should be considered when treating individual trees or where the presence of desirable species preclude foliar application. Stump treatments can be used as long as the ground is not frozen. Horizontally cut stems at or near ground level. Immediately apply a 25% solution of glyphosate or triclopyr and water to the cut stump making sure to cover the outer 20% of the stump. Basal bark applications are effective throughout the year as long as water is not standing at time of application. Apply a mixture of 25% triclopyr and 75% basal oil to the base of the tree trunk to a height of 12-15 inches from the ground. Thorough wetting is necessary for good control; spray until run-off is noticeable at the ground line. Applications should be made to cut stumps within one minute of cutting.

For larger trees stem injections of imazapyr or triclopyr can be used. For trees already chopped down apply these herbicides to the stem and stump to prevent resprouting. For saplings, apply triclopyr as a 20% solution in commercially available basal oil, diesel fuel, or kerosene (2.5 quarts per 3-gallon mix) with a penetrant (check with herbicide distributor) to young bark as a basal spray. For resprouts and seedlings thoroughly wet all leaves with a surfactant in water with and triclopyr or glyphosate herbicide as a 2% solution (8 ounces per 3-gallon mix between July to October) or clopyralid as a 0.2- to 0.4% solution (1 to 2 ounces per 3-gallon mix between July to September).

2. Invasive and Non-native Plants You Should Know – Recognition Cards, by A. Richard and V. Ramey. University of Florida-IFAS Publication # SP 431. 2007.