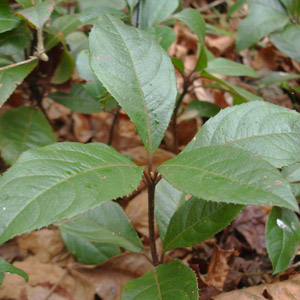 Ardisia japonica has only recently (2008) been reported to escape from cultivation and establish populations in the wild (Simon, 2009). Ardisia japonica (often called Japanese ardisia in the horticultural trade) can be purchased from nurseries scattered about the United States, and has been cultivated locally (Alachua County, Florida) at a nursery and a botanical garden. The genus Ardisia is well known to Florida natural land managers. Two introduced species have been designated as FLEPPC Category I species (A. elliptica and A. crenata).

The appearance of Ardisia japonica is distinct from other species of Ardisia that occur in the wild in Florida. Ardisia japonica spreads as a cluster of low, slender stems less than one foot tall that have no branches above ground. It has dull, rough-textured leaves and the berries, which are red, occur singly next to the stem, and are usually not abundant. The other three species (A. elliptica, A. crenata, and A. escallonioides) all grow much taller (over waist high in the case of Ardisia crenata and over head high for the other two species) with thicker stems that have branches. They have smooth, leathery, simple leaves, and have clusters of berries held out away from the main stem. The fruit of A. escallonioides and A. elliptica turns black when ripe.

According to various internet sources, Ardisia japonica grows throughout southern states, from South Carolina to Texas. Land managers in this region – as well as those in northern Florida – should be aware of this plant. The two current FLEPPC Category I Ardisia species have become major problems in Florida, and are not easy to control.