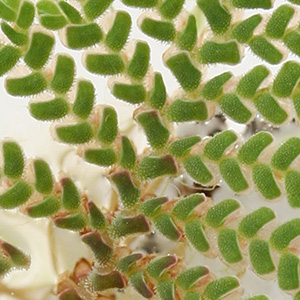 Azolla pinnata (feathered mosquitofern) is a small, non-native, free-floating fern. The Azolla group, which contains only 6 or 7 species, are the smallest ferns in the world. However, size does not matter. Azolla pinnata spreads rapidly by vegetative growth and can form dense mats, interfering with boating, fishing and swimming. It can block sunlight from reaching submersed plants and can also reduce oxygen levels in the water by blocking the interface between the water surface and the atmosphere. Azolla can survive on moist soil in and around rivers, ditches, and ponds, allowing it to survive dry periods (NCSU Aquatic Weed Fact Sheet). Due to its invasive potential, Azolla pinnata is listed on the Federal Noxious Weed List. It was likely introduced by someone emptying their aquarium into a natural waterbody.

Azolla species typically have reduced leaf size and shape to lie low on the water surface, modified roots or root-like structures for buoyancy, and hairs on the leaves to repel water (Jacono, 2016), giving it a velvet-like appearance. The triangular shaped plant is 1.5 – 3 cm in size. “The leaves of Azolla have been drastically reduced by nature. They measure only 1-mm or so long and are arranged in an alternate, overlapping pattern along the branches Each leaf is directly attached to its branch, wrapping around the branch to form an upper and a lower lobe. The upper leaf lobe is held above the water surface. It is fleshy and green with chlorophyll and has a cavity specialized for harboring the cyanobacterium, Anabaena azollae, famous for its symbiotic relationship in providing nitrogen to its ferny host. The lower lobe sits on the water surface: it is not submerged. It is composed of a single, simple layer of cells and appears nearly translucent. Under environmental stress, Azolla plants turn red from the production of anthocyanin pigments. This general description holds worldwide for Azolla species.” (Jacono 2016)