Some species native to Florida *SEE BELOW* 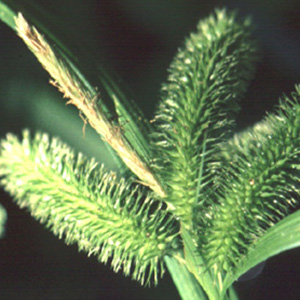 There are approximately 90 species of Carex in Florida, including those indigenous to Florida and non-native species that were purposely or unintentionally introduced and now reproduce outside of cultivation. They are in the Cyperaceae family, which is large and widely dispersed throughout the U.S. and Canada. Carex species grow in both wet and dry conditions, occurring in habitats as diverse as marshes, mesic forests, and dry, open sandhills. They are grass-like or rush-like herbs with fibrous roots or rhizomes, mostly solid stems (culms), closed sheaths, and spiked flowers, one in the axil of each of the bracts.

Members of Carex are extremely difficult to identify because of the large number of species, the similarity of many of the species, and the relatively small size of the critical reproductive structures. Sedges (Cyperaceae) and grasses (Poaceae) are similar in that they both bear reduced flowers subtended by an assortment of scales or bracts; they have similar leaves, are of the same general habit, and they both produce 1-seeded fruits. According to Mohlenbrock, one of the chief technical differences between grasses and sedges is in the fruit, which in grasses has the seed adjoined to the pericarp, while in sedges the seed is not fused with the pericarp. Other differences are that grasses generally have hollow stems, which are solid in sedges; open sheaths in grasses, closed in sedges; 2-ranked leaves in grasses, 3-ranked in sedges; and anthers versatile in grasses, basifixed in sedges.

All Carex species are perennials. They can be clump-forming with fibrous roots, or single plants or small clumps from rhizomes. Culms or stems are usually simple and erect, solid, unbranched and more or less triangular in all species. They can range from 6 inches to 4 feet tall. Sedge leaves are borne at the nodes in three ranks along the culm. The leaf is composed of a blade and a sheath. The sheath wraps around and encloses a portion of the culm (known as a closed sheath). The blade is parallel-veined and generally elongated. Blades are usually flat but may also be folded, deeply channeled, or inrolled into a slender tube. There is often a ligule along the inner face of the leaf where the blade joins the sheath. The inflorescence is composed of one to many spikes and is often subtended by a leaf-like bract. The spike usually contains several to numerous flowers. The spike bears small bracts known as scales; each scale subtends a flower. The scale may be keeled or rounded on the back. The staminate flowers are always borne separate from the pistillate flowers and usually occur on the same plant. Staminate flowers consist of one to three stamens; pistillate flowers consist of a single pistil. The pistillate flower and the achene are nearly entirely enclosed by a sac-like structure known as a perigynium. A mature perigynium must be seen for absolute certainty in identifying a species of Carex. The fruit is a dry, 1-seeded, indehiscent achene (nutlet).

Carex acidicola – not native to Florida

Carex brysonii – not native to Florida

Carex lutea – not native to Florida