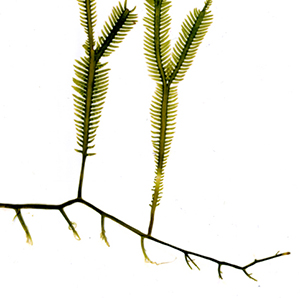 pronounced: caul-er-pa tax-i-fol-ee-ah
from: caulis (L.): stalk of a plant
taxi : Yew-like
folia (L.): leaves
“referring to the dark-green and flattened foliage similar to that of the genus Taxus(Yew)”

Caulerpa taxifolia is a marine, green alga, a certain strain of which is invading sectors of the western coasts of the Mediterranean Sea where it grows much more robustly than it does in its native range. In the Mediterranean it has spread into thousands of hectares where it fills the water column with hundreds of tons of plant biomass per hectare. It is protected from sea urchins, fish and other herbivores by its toxicity. Caulerpa taxifolia is native to the Caribbean and other tropical seas where it grows in small patches and does not present problems. However, it was reported in 2000 that the Mediterranean Sea strain of the alga was discovered in California waters, where it is not native, and where it may spread as it has in the Mediterranean.

Caulerpa taxifolia is difficult to control

If you want to read the research yourself, perhaps to clarify or expand an area of information contained here, or to help determine your own line of research, you are welcome to query the world’s largest collection of international scientific literature about aquatic, wetland and invasive plants, the APIRS bibliographic database, which contains more than 65,000 citations and their content keywords. Or you might want to ask us to do it for you and mail or e-mail the search results to you.

This is the literature about Caulerpa taxifolia that was used to develop this web page. More research items about this plant may be found at APIRS: