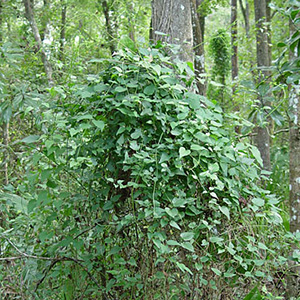 Japanese clematis (Clematis terniflora) is a vigorous woody vine that has been used for landscaping in the southeastern United States since 1877. The plant has been recommended for landscape use in cold-hardy zones and is sometimes grown on trellises. Other common names include Sweet autumn virgin’s bower and autumn clematis.

Although native to Asia, Japanese clematis has naturalized and is considered invasive in many areas of the country, including Florida. Japanese clematis is currently classified by the Florida Exotic Plant Pest Council as a Category II Invasive Species. This designation indicates the plant has increased in abundance and frequency in natural areas, but has not altered native plant communities to the extent caused by a Category I species.

In natural areas, Japanese clematis typically invades along roadsides and thickets, as well as along the edges of woods near creeks. It also grows well in the well-shaded understory of forests. Two native species of similar-looking Clematis also occur throughout northern and central Florida: virginsbower (C. virginiana) and satincurls (C. catesbyana). Toothed leaves distinguish each of these native species from Japanese clematis.