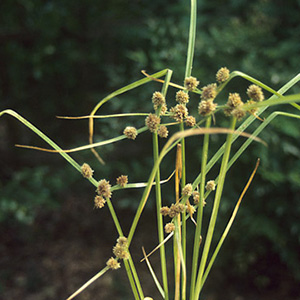 Variable flatsedge, is listed in Holm’s list of the world’s worst weeds, being a problem especially in rice, sugarcane, tea and corn. Variable flatsedge is native to the tropics of the Old World, but is spreading well outside its native range. This sedge has a relatively short generation period of as little as 4 to 6 weeks from seed to seed as opposed to a more usual one or two generations a year: Bryson notes that such a short life cycle is more like that of an insect than a plant.

Cyperus difformis is found growing in wet banks, lake margins, and disturbed sites along the central peninsula, Miami-Dade, Leon, and Escambia counties. It blooms in the summer (Wunderlin, 2003).

Variable flatsedge seems to be spreading along major waterways and in rice production areas of the U.S. In California, this plant has become resistant to rice-field herbicides. In Asian rice production, where herbicides are not used, this weed may account for 60-70% of the total biomass of the rice field.