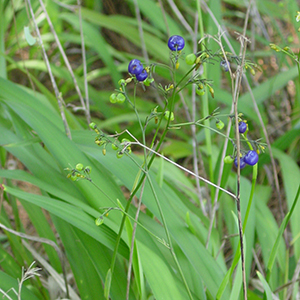 The cerulean flaxlily, Dianella ensifolia, is a perennial evergreen native to Australia, Southeast Asia, and Africa. It is also called dianella lily, flax-lily, umbrella dracaena, Benjuang, and sagatit. Although it is not prohibited by the State of Florida or listed by the Florida Exotic Pest Plant Council, it has been documented in natural areas of Highlands and Miami-Dade Counties in Florida. As of 2009, the largest known infestation in Florida occured in Highlands Hammock State Park, located in Sebring, Highlands County, in central Florida. Cerulean flaxlily infested or occured in over 100 acres of the park.

Belonging to the family Hemerocallidaceae, the genus Dianella consists of about 181 species, forms and varieties worldwide. The cultivated variegated flaxlily (Dianella tasmanica ‘Variegata’) is commonly planted in Florida landscapes. Other species of this genus also have been cultivated and hybridized and are widely utilized in landscape settings. It is not uncommon to find Dianella species and cultivars promoted as “Florida friendly” landscape plants. Some forms or varieties of the cerulean flaxlily include D. ensifolia f. albiflora, D. ensifolia f. aureovariegata, D. ensifolia f. racemulifera, and D. ensifolia f. straminea. Common names of cultivars include border gold, border silver, Darwingold and sougold. Cultivars differ in coloration patterns or form in leaf variegation. The taxonomy of Dianella is still unclear as little research has been conducted on this genus.

Cerulean flaxlily has compressed flattened stems. Leaves have parallel venation with finely serrated margins. The serrations may only be visible on one margin of the leaf. The terminal florets form a panicle which grows beyond the height of the lily by about 0.25 m. The perfect flowers have three sepals and three petals and are white with a yellowish tint. Fruits are succulent, bright, violet-blue berries typically containing five shiny, black seeds. While the plant flowers and fruits most prolifically during the warm months of the year, some flowers and fruit can be present on plants throughout the year. The pulp of the berries is high in carbohydrates. It is eaten by some birds in their native habitat, which results in the spread of seeds. The seeds have been used as a natural rodenticide and are reported to be toxic to livestock, which indicates they are not likely to be dispersed by most mammals (Wang, 1984).

Propagation of the plant is by vegetative growth or seed. In its native range, the cerulean flaxlily occurs in open shrubland, evergreen rainforests, wet pinelands, coastal dunes, sandbars, grasslands and open lowland forests, from sea level to 1600 m. It occurs in a wide variety of niches in both temperate to tropical climates, and proliferates in open or shaded habitats. It seems to tolerate a wide range of temperature, light, moisture, soils and elevation. In Highlands Hammock State Park (HHSP), we have observed it as an epiphyte on sabal palms. The very broad range of climatic tolerance of this plant demonstrates a potential threat for spread into other areas of Florida and the southeastern United States.