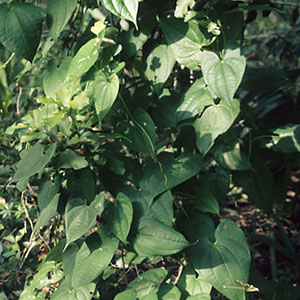 This member of the yam family (Dioscoreaceae) produces edible underground tubers. (Though most yams contain an acrid component, cooking makes them edible.) The large underground tubers of winged yam can weigh up to 100 pounds. Like air potato, winged yam also produces large numbers of aerial tubers, which are potato-like growths attached to the stems. These grow into new plants. Dioscorea species are cultivated for their edible tubers in West Africa where they are important commodities. Uncultivated forms (as in Florida) however are reported to be bitter and even poisonous. Dioscorea varieties, containing the steroid diosgenin, are a principal material used in the manufacture of birth-control pills. Research has shown that winged yam has antifungal properties.

Winged yam is named after its “winged stem” (wide ridges along the squarish stem). (D. bulbifera has a round stem.) Winged yam has a winter dormant period when the stems die back to the ground. After dormancy, the underground tubers give rise to stems which can quickly grow to 30 feet long. The vine’s stem is herbaceous (not woody). The large leaves are up to 8 inches long and are heart-shaped (cordate). The leaf blade’s basal lobes are rounded, and its leaf veins radiate from a single point. The leaves have long stems (petioles), and are opposite on the stem. (On D. bulbifera, leaves are alternate on the stem.) Winged yam flowers hang in relatively long clusters (panicles and spikes) up to 1 foot long. The fruit is a 3-part capsule of winged seeds. Winged yam plants produce aerial tubers that are attached closely to the stems where leaves attach to the stem (axil). These aerial tubers are greyish-brown and somewhat irregular with a rough, bumpy surface. In addition to the aerial tubers, edible underground tubers may weigh up to 100 pounds.

Long petioled, opposite (often with only one leaf persistent); blades to 20 cm (8 in) or more in length, narrowly heart shaped, with basal lobes often angular.

Some stands forming blankets of shingled leaves over native vegetation and able to cover even mature trees. FLEPPC Category I

Text from Invasive and Non-Native Plants You Should Know, Recognition Cards, by A. Richard and V. Ramey, 2007. UF/IFAS Center for Aquatic and Invasive Plants, Publ. No. SP 431.

View more information and pictures about the winged yam vine, as contained in the Langeland/Burks book, Identification & Biology of Non-Native Plants in Florida’s Natural Areas.

2. Invasive and Non-native Plants You Should Know – Recognition Cards,
by A. Richard and V. Ramey. University of Florida-IFAS Publication # SP 431. 2007.