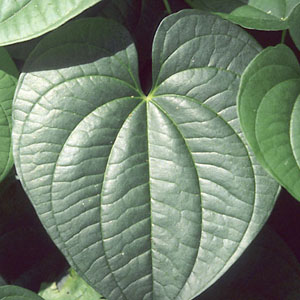 A native to tropical Asia, air potato, Dioscorea bulbifera, was first introduced to the Americas from Africa. In 1905 it was introduced to Florida. Due to its ability to displace native species and
disrupt natural processes such as fire and water flow, air potato has been listed as one of Florida’s most invasive plant species since 1993, and was placed on the Florida Noxious Weed List by the Florida
Department of Agriculture and Consumer Services in 1999.

Air potato is in the family Dioscoreaceae, or simply the Yam Family. It is an herbaceous twining vine, growing 70 feet or more in length. Leaves are broadly cordate (heart shaped) and alternately arranged on stems.
A distinguishing characteristic of air potato is that all leaf veins arise from the leaf base, unlike other herbaceous vines such as smilax and morningglories. Flowers are inconspicuous, arising from leaf axils in
panicles 4 inches long, and are fairly uncommon in Florida. Vegetative reproduction is the primary mechanism of spread. This is through the formation of aerial tubers, or bulbils, which are formed in leaf axils.
These vary in roundish shapes and sizes. In addition, large tubers are formed underground, some reaching over 6 inches in diameter.

Dioscorea alata or winged yam can easily be mistaken for air potato, D. bulbifera. Winged yam gets it name from its winged internodes, a characteristic feature of the species. Another difference between D. alata and D. bulbifera is the arrangement of the leaves. D. alata has opposite leaves as opposed to the alternate leaves of air potato. Winged yam grows to 30 feet, roughly half the length of the invasive species. This species of Dioscorea does not produce nearly as many bulbils as D. bulbifera. However, this species can also be considered invasive and problematic, but to a lesser extent than D. bulbifera. Although considered to be a species of yam, these plants are very toxic and should not be consumed.

Air potato can grow extremely quickly, roughly 8 inches per day. It typically climbs to the tops of trees and has a tendency to take over native plants. New plants develop from bulbils that form on the plant, and these bulbils serve as a means of dispersal. The aerial stems of air potato die back in winter, but resprouting occurs from bulbils and underground tubers. The primary means of spread and reproduction are via bulbils. The smallest bulbils make control of air potato difficult due to their ability to sprout at a very small stage.

Prevention is a key step in the management of air potato. Bulbils are the primary mechanism of spread, and research has shown even minutely small propagules can sprout and form new plants. How these bulbils are spread
is speculative, but it appears movement of contaminated brush, debris or soil is the primary mechanism. Mowers and other brush-cutting equipment may also disperse long distances, either through contaminated equipment or
throwing of the bulbils during the mowing operation. Spread via birds and other animals may occur, but this has not been confirmed. Water is also a major means of dispersal, so care must be taken to first eliminate populations
along water bodies where bulbils may be easily spread. In addition, extra time must be utilized after flood events, as spread may be extensive.

Weeds such as air potato generally invade open or disturbed areas – following a burn, clearing mowing, etc., so these areas are particularly vulnerable to invasion. Therefore, a healthy ecosystem with good species
diversity will help to deter infestation.

Another very important combined cultural and mechanical method is the air potato roundup. Each year many counties in Florida, including Hernando, Alachua, and Duval counties, recruit volunteers to help protect and conserve
Florida’s natural areas through the removal of air potato. During the air potato round up, citizens, organizations, and local businesses get together to collect vines and bulbils. In 2003, the City of Gainesville collected
13 tons of air potato and other invasive plants (Gainesville Parks and Recreation). Removing bulbils and vines from natural areas helps prevent air potato to new areas, as well as reduces the possibility of reinfestation.
In addition to collecting and removing aboveground bulbils, digging up and removing below ground tubers will help. This may be particularly useful to eliminate isolated plants/small populations – especially in areas that
cannot be easily accessed or chemically treated. One of the most important control measures for air potato is the removal of bulbils and tubers.

Mechanical methods are limited for air potato, as control of the vines generally results in damage to the vegetation being climbed/smothered by the air potato. Burning also results in excessive damage to the native vegetation,
as the fire follows the vines into the tree canopy. Mowing will help to suppress air potato, but as mentioned previously, this may increase the overall problem due to spreading of the bulbils.

A leaf feeding beetle from Asia, Lilioceris cheni Gressit and Kimoto (Coleoptera: Chrysomelidae), was released in Florida as a biological control agent of air potato in late 2011. The beetle was discovered in Nepal by scientists from the USDA/ARS Invasive Plant Research Laboratory in Fort Lauderdale (IPRL), and later the same species was found in Yunnan Province of China. Adult beetles are either bright red (Chinese biotype) or brown (Nepalese biotype), and about 9 mm (3/8”) long. They live for up to six months, during which they lay as many as 4,000 eggs. Females lay eggs in clusters on the undersides of young, expanding air potato leaves. Adult females bite the veins of the leaves on which they oviposit, causing the expanding leaves to curl at the edges and cup the eggs, perhaps to provide protection from inclement weather or egg predators. Eggs hatch in about 4 days, and the reddish colored larvae feed on leaves for around 10 days. Late stage larvae and adults occasionally feed on bulbils. Fully mature larvae drop to the ground and burrow into the soil where they secrete a whitish oral substance that hardens into a cocoon. Several pupae often clump together within this material. Adults emerge from the soil after about 16 days and begin to lay eggs 15 days later. Larvae are often found feeding in groups on the growing tips, which inhibits vine elongation and reduces the ability of the plant to climb vertical structures. The leaves and vines of air potato die back in the winter depriving the beetles of a food source. During this time, the adult beetles enter a resting state beneath leaf litter or other debris on the ground. The overwintered adults emerge during spring when air potato vines sprout from bulbils and subterranean tubers, and the adults begin once again to feed and lay eggs.

Host range testing conducted at the IPRL quarantine facility prior to field-release demonstrated that both Nepalese and Chinese biotypes of the air potato beetles would only feed and complete development on Dioscorea bulbifera (Pemberton et al. 2010, Center et al. 2013). They do not feed on any other species of Dioscorea, including the Florida native species, D. floridana and D. villosa, or the other invasive yam in Florida, D. alata. Based on this safety data, a permit for field release was granted in February 2011. The first beetle field-releases were made by USDA/ARS in November 2011 at Long Key Natural Area in Broward County and at Kendall Indian Hammock Park in Miami-Dade County. The Florida Department of Agriculture and Consumer Services, Division of Plant Industry (DPI) joined the rearing and release program in 2012, and the combined efforts by the IPRL and DPI have resulted in the release of over 145,000 beetles at 175 sites in 32 counties. Beetle survival and establishment has been demonstrated at several release sites, and resulted in a reduced height of vines, decreased bulbil production, and most importantly, an increase in native vegetation. Releases and evaluation of impact will continue in 2014.

Chemical control is one of the most effective means of control for air potato, but single applications will generally not provide complete control. This is due to resprouting of bulbils or underground tubers. A dilution of triclopyr
(Garlon 3A at 1 to 2% solution or Garlon 4 at 0.5 to 2% solution) in water can be an effective control for air potato when applied as a foliar application. Be sure to include a non-ionic surfactant at 0.25% (10 mls or 2 teaspoons per
gallon of spray solution). A 2 to 3% solution of glyphosate (Roundup, etc.) can also be effective. These herbicides are systemic (move throughout plant tissue) so care must be exercised to minimize off-target damage. If air potato vines
are growing up into trees or other desirable species, vines should be cut or pulled down to minimize damage to the desirable vegetation. Pulling the vines down without severing them from the underground tuber will allow the herbicide
to move into the tuber and provide better control. The best time to apply an herbicide is in the spring and summer when air potato is actively growing. Be sure to allow adequate time for the plant to regrow from the winter to ensure
movement of the herbicide back into the underground tuber. (As plants grow and mature, they begin to move sugars back into the roots and below-ground tubers). However, treat before the plants begin to form new bulbils.
Persistence and integration of control methods will be the key to complete air potato management.

To See more information and pictures about the air potato vine, as contained in the Langeland/Burks book, Identification & Biology of Non-Native Plants in Florida’s Natural
Areas, download this Acrobat .PDF file.

3. Invasive and Non-native Plants You Should Know – Recognition Cards,
by A. Richard and V. Ramey. University of Florida-IFAS Publication # SP 431. 2007.