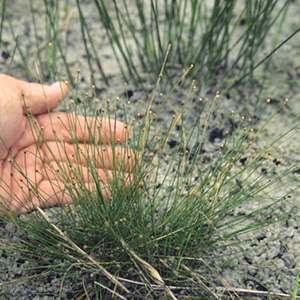 This spikerush is bigger than some forms of E. baldwinii, but smaller than other spikerushes; similar to E. flavescens. It is commonly found growing in single clumps in fresh water and brackish marshes nearly throughout Florida. This species is one of 30 Eleocharis in Florida (Wunderlin, 2003). Annual spikerush is sporadically distributed in the U.S. along the Pacific Coast, in the northeast, and among the southern states (Kartesz, 1999).