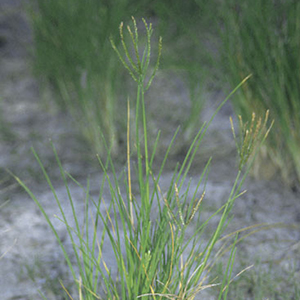 Originally native to Eurasia, goosegrass is widely distributed in the United States. It is also widespread in Florida where it is commonly found in cultivated fields, turf, pastures, landscapes, orchards, roadsides, and other disturbed sites. Goosegrass is an annual plant that produces a prostrate, mat-like rosette with flattened stems radiating from a central point. It is often described as looking like someone has stepped in the middle of the plant, flattening it out. The leaf blade is flat or folded, and can grow 2–8 inches long by 1/13–1/3-inch wide. Leaf blades are mostly hairless, except occasional sparse long hairs on the upper surface near the base. The ligule is membranous and uneven. Leaf sheaths are flattened, smooth to sparsely hairy toward the ligule, and whitish at the base. The seedhead consists of 2–13 fingerlike spikes, which can be 2–6 inches long and 1/10–1/3-inch wide at the top of stems. Usually one spike is below the others, which are bunched toward the tip. On the underside of each spike, there are two rows of 3–6 seeds, which are brown to black and 1/13-inch long. Goosegrass has a fibrous root system and never roots at the nodes.
Source: D.C. Odero, R. Rice, L. Baucum, Biology and Control of Goosegrass in Sugarcane, SS-AGR-367, Agronomy Department, Florida Cooperative Extension Service, Institute of Food and Agricultural Sciences, University of Florida. 2013.