Not Present in Florida 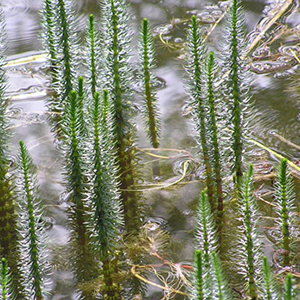 Mare’s-tail is a perennial aquatic herb arising from a rhizome. Stems are unbranched and can be both emersed and submersed, or of one form only. The emersed form is erect above the water with a “bottle-brush” shape, tapering to a tip. The leaves are whorled, entire, 1-10 cm. long, and linear to linear-attenuate. Small axillary flowers appear in middle and upper leaves. The fruit is a small ovoid nut. Submersed forms of Mare’s-tail sometimes appear reddish in color.

Mare’s-tail is one of the most common aquatic plants in Greenland where it occurs from cold waters at the foot of glaciers to warm, temporary ponds in the low arctic. It can persist on damp shores and wet sediments, or in water to 6 m deep. Mare’s-tail also occurs in Labrador, Alaska, Newfoundland and northern states or areas of high elevation in the U.S.

Light and Pressure In Two Freshwater Lakes and Their Influence On the Growth, Morphology, and the Depth Limits of Hippuris vulgaris, by Bodkin, P.C., Posluszny, U., Dale, H.M. 1980. FRESHWATERBIOL. 10:545-552.