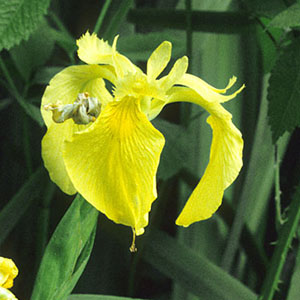 pronounced: ee-ris sood-a-ko-rus
from: iris (G.): Greek goddess of the rainbow and messenger to the gods
pseud (G.): false
acorus (G.): sweet flag genus of plants
Referring to similarity with the genus Acorus

Yellow flag is non-native in the U.S., and is spreading throughout the country.

Iris pseudacorusis a wetland plant that is especially showy during its short blooming period. This good-looking plant has been transplanted into well-watered gardens all over the world and has widely escaped; it is also used in sewage treatment, and is known to be able to remove metals from wastewaters. Like cat-tails, yellow iris colonizes into large numbers, forming very dense monotypic stands, outcompeting other plants.

Iris pseudacorus especially when not in bloom, might be confused with

The best way to track the spread of invasive aquatic plants may be to identify the drainage basins (watersheds) they have been discovered in. Drainage maps give useful information to eco-managers because drainage maps show precisely where the plants are, making it easier for managers to infer where the plants might go next, and thus where to take preventive measures.

The action of mechanical harvestors and chopping machines

No biological control work has been done for this species. Damage by invertebrate and vertebrate grazers is negligible; deer eat it sparingly; hay containing yellow flag causes gastroenteritis in cattle (Sutherland 1990).

Iris pseudacorus is susceptible to many registered herbicides, but is resistant to terbutryne (Thomas 1982) provide
yellow flag colonized areas of open water created by herbicide spraying of Phragmites australis (Axell 1982).

If you want to read the research yourself, perhaps to clarify or expand an area of information contained here, or to help determine your own line of research, you are welcome to query the world’s largest collection of international scientific literature about aquatic, wetland and invasive plants, the APIRS bibliographic database, which contains more than 54,000 citations and their content keywords. Or you might want to ask us to do it for you and mail or e-mail the search results to you.

This is the literature about Iris pseudacorus that was used to develop this web page. More research items about this plant may be found at APIRS