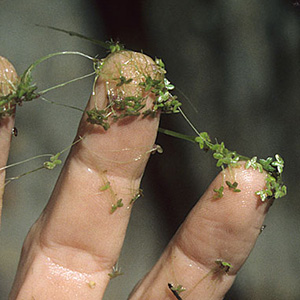 Landoltia punctata looks very similar to the native giant duckweed, Spirodela polyrhiza. It is frequently found growing in rivers, ponds, lakes, and sloughs nearly throughout the state. Dotted duckweed is native to the Old World but escaped from cultivation. It blooms all year (Wunderlin, 2003).

The name “dotted duckweed” is confusing when applied to this plant because there are distinct red dots on many individuals of the native giant duckweed, Spirodela polyrhiza, but there are none on this species. (The term “dotted” apparently refers to the barely visible ridge of “dots” on the leaf surface of Landoltia punctata.)

This plant is easily confused with the native plant, giant duckweed, Spirodela polyrhiza. Landoltia duckweed is smaller than Spirodela polyrhiza, is more shoe-shaped, does not have a red dot on top, usually has only up to 4 roots, and sometimes has a red margin on the underneath of the leaves. The native giant duckweed is larger, has rounder leaves, some have a red dot on the top, has up to 9 and more roots, and is dark red underneath the leaves.