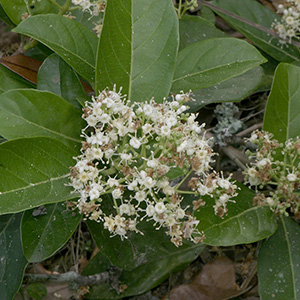 Glossy privet is occasionally found in disturbed sites from the northern coast south to the central peninsula of Florida. It is native to Asia, but has escaped cultivation (Wunderlin, 2003) and is now naturalized in Florida. Glossy privet has been classified as a Category I species by the Florida Exotic Pest Plant Council.

There are about 50 species of Ligustrum, all native to Europe, North Africa, and Asia. Ligustrum has been developed into an assortment of ornamental varieties in the U.S. and other parts of the world. In 1852, privet was introduced to the United States for use as an ornamental shrub and is still commonly used as a hedge. Because of Ligustrum’s ability to tolerate air pollution and other poor environmental conditions, it was regarded as a great landscape plant and planted extensively. Unfortunately, this was before its invasive characteristics were discovered. Establishment of privet in many natural areas of Florida has occurred through its escape from cultivation. Glossy privet (L. lucidum) is listed as a Category I species with the potential to disrupt native plant communities in Florida by the Florida Exotic Pest Plant Council. Chinese privet (L. sinense) is a Category I species that is currently disrupting native plant communities in Florida.

Ligustrum spp. are perennial shrubs that can grow up to 16 feet in height. Ligustrum bark is tan to gray in color with a smooth texture. Leaves are elliptic to ovate in shape, oppositely arranged on twigs. Flowers have both male and female parts. Each flower has petals fused into a tube with four separate lobes. Flowers are borne on small panicles on short lateral branches on the end of the twig. The oblong, blue/black fruit is a drupe containing 1 to 4 seeds. Fruit clusters persist through the winter. Mature trees can produce hundreds of fruit.

Ligustrum spp. grows readily from seed or from root and stump sprouts. Wildlife can aid in the dispersal of the seed, often relocating the plant over long distances.

Glossy privet is occasionally found in disturbed sites from the northern coast south to the central peninsula of Florida. It is native to Asia, but has escaped cultivation (Wunderlin, 2003) and is now naturalized in Florida. Glossy privet has been classified as a Category I species by the Florida Exotic Pest Plant Council.

Ligustrum spp. is capable of invading natural areas such as floodplain forests and woodlands. The aggressive nature of privets allows for the formation of dense thickets that out compete desirable plants. The amount of seed produced by privet is another mechanism for its prolonged survival. Even though privet is still used in the landscape and available for purchase at garden centers and online distributors, it is an invasive weed and should be treated as such.

The first step in preventative control of privet is to limit planting and removal of existing plants within the landscape. If possible, removal should occur before seeds are produced. Since seeds remain on the plant for several months, care must be exercised to prevent seed spread and dispersal during the removal process.

For smaller infestations or areas where herbicide applications are not feasible mowing and cutting are appropriate. Stems should be cut as close to the ground as possible at least once per growing season. Mowing and cutting will not eradicate Ligustrum spp., but it will provide some level of management. Continuous mowing will work, but frequency is key.

Hand pull young seedlings and small plants. Larger plants may need to be dug out. Plants should be pulled as soon as possible, before they produce seeds. The entire root must be removed to prevent resprouting.

Foliar sprays are effective for dense thickets of Ligustrum. Care must be taken to avoid non-target plants.The ideal time to treat is while plants are in leaf in late autumn or early spring but when many native species are dormant. Triclopyr at 1-2 quarts broadcast rate per acre or 2% solution are recommended.

The cut stump method should be considered when treating individual shrubs. Immediately after cutting stems at or near ground level, apply a 25% solution of glyphosate and water or triclopyr and water to the cut stump, being careful to cover the entire surface. Effectiveness of the herbicide is increased if holes are cut in the top of the freshly felled stump.

The basal bark method consists of a mixture of 25% triclopyr and 75% horticultural oil applied to the basal parts of the shrub to a height of 12 to 15 inches from the ground. Thorough wetting is necessary for good control; spray until run-off is noticeable at the ground line.

2. Invasive and Non-native Plants You Should Know – Recognition Cards,
by A. Richard and V. Ramey. University of Florida-IFAS Publication # SP 431. 2007.