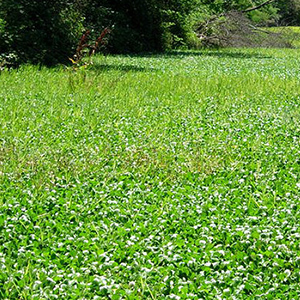 See flyer from the California Department of Food and Agriculture: A New Invader–South American spongeplant: worse than water hyacinth?

As of June 2014, South American spongeplant has only been detected in California within the continental U.S.

Limnobium laevigatum is a tropical or subtropical weed that occurs in rivers, ponds, lakes, canals, and other aquatic habitats. In its native range, this species is a weed for foresters because it blocks canals used for transporting timber. In California, it reduces biodiversity, changes community structure, and limits access to water bodies.

Limnobium laevigatum was first detected in California in 2003 in two small, isolated locations, but in 2007, it was found in a river system and several waterways in twelve counties. Since then it has appeared in several locations, despite active control efforts. Because it reproduces sexually by seed and vegetatively through offshoots, this species can rapidly form dense mats on the water surface. Propagules are dispersed by water and birds, and as hitchhikers on watercraft. This species appears to have a wide adaptive potential given its widespread distribution throughout Central and South America. Cold temperatures are likely to limit its northerly distribution in the United States.

In Puerto Rico, L. laevigatum grows in shallow ponds, sluggish shaded rivers, and fresh-water ditches and swamps at or near sea level. It is grown and sold by the aquatic nursery plant trade under the common name of frogbit. It is now also regulated as a state Noxious Weed (List Q) and subject to eradication efforts by the California Department of Food and Agriculture (CDFA).