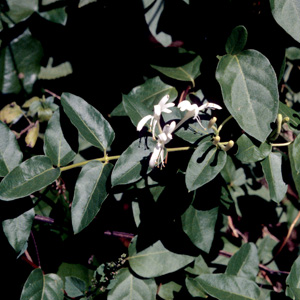 The family Caprifoliaceae contains an assortment of ornamental plants that are used in the landscape, including Abelia, Kolkwitzia, Weigela, and Lonicera japonica. Abelia, Kolkwitzia, and Weigela are shrubs with showy, fragrant flowers that are used for shrub borders, groupings, or mass plantings. Highway designers, wildlife managers, and landscapers use honeysuckle for a variety of reasons. Managers of wildlife areas plant Lonicera japonica as it provides winter forage for deer. Lonicera is a favorite of gardeners and landscape architects because of its fragrant, beautiful flowers and fast growth. Highway designers use honeysuckle in order to control erosion and stabilize banks. Even though Japanese honeysuckle is a highly desirable, highly utilized ornamental, it has quickly become a problem in the U.S. due to its fast growth rate and ability to displace native plant species. Lonicera japonica has been placed on the Florida Exotic Pest Plant Council’s list of invasive species because of these characteristics.

In 1906 Japanese honeysuckle was introduced to the United States from Japan for use as an ornamental plant [other sources state 1806]. In central Florida Japanese honeysuckle is found in Orange, Sarasota, Hillsborough, and Dade counties, and readily found in the panhandle and northern regions of the state. Lonicera japonica primarily occurs in disturbed habitats, including successional fields, roadsides, forest edges, and fencerows. In forest openings created by disturbance, disease or insect damage, or tree gaps, Lonicera is an opportunistic invader that will quickly colonize these areas. An established planting of honeysuckle is capable of engulfing small trees and shrubs, causing their collapse. Shading of plants in the understory can also occur, choking out many native species.

Lonicera japonica is an evergreen, woody, twining vine. Ovate-shaped leaves are opposite, roughly 1 ½ to 3 inches long with variably pubescent petioles. The younger stems are reddish in color and are fuzzy or slightly pubescent. Hollow, older stems are hollow with brownish bark that peels in long strips. The stems are usually 80-120 feet long.

Lonicera japonica has fragrant, white flowers that fade to yellow and borne in pairs on axillary peduncles. Individual flowers are tubular, with a fused two-lipped corolla. Flower production occurs from late April through July, and sometimes through October. Many varieties available in the nursery trade are easily distinguished by flower color from the invasive honeysuckle. There is also a native honeysuckle that is often confused with the invasive species. Lonicera sempervirens (coral honeysuckle), the native honeysuckle, is easily distinguished from the invasive honeysuckle by its upper leaves and berries. Leaves of the native species are connate – forming a single leaf that the stem grows through. Lonicera japonica has black berries, while the native species possesses red to orange berries. The fruits are produced September through November. Each contains 2-3 ovate seeds that are 2-3 mm long, dark-brown to black in color.

Birds that consume the fruits and disperse the seed spread Japanese honeysuckle. However, this species is also capable of reproducing vegetatively by underground rhizomes, and aboveground runners. It also has the ability to develop a rather large seed bank after becoming established and seed germinate after soil disturbance. Wide habitat adaptability, wide seed dispersal, rapid growth rate, extended growing season, and lack of natural enemies make Lonicera japonica a strong competitor against native species.

Lonicera japonica is able to displace native species by outcompeting native plants for light, space, water, and nutrients. Lonicera japonica grows very rapidly, and will send out runners that will root and grow anywhere. In nature, honeysuckle vines will twine around anything growing in close proximity, eventually covering small trees and shrubs. This can lead to the collapse of the trees and shrubs due to the mere weight of vegetation. Dense thickets of vegetation prevent the germination and growth of many native species, eventually preventing the replacement of understory shrubs and trees. Honeysuckle opens the door for many other invasive species to invade, further decreasing the natural diversity of forests or natural areas.

Regular monitoring and rouging of plants can prevent the spread and establishment of Japanese honeysuckle. Programs to educate homeowners on proper plant (honeysuckle) identification will also reduce the spread of this species.

Hand-pulling, grubbing with a hoe or a shovel, and removal of trailing vines is practical for small infestations. Remove and destroy all plant material after cutting to prevent rooting and reinfestation. Periodic mowing can slow vegetative spread but may cause resprouting and increase stem density. Aggressive mechanical tillage is also effective, but may not be an option in many areas. However, soil disturbance may stimulate seed germination from the seed bank.

In fire-dependent natural communities, prescribed burning can control Japanese honeysuckle. Seedlings and young plants are susceptible to fire, however roots and shoots may survive a burn and resprout.

Lonicera japonica has few natural enemies in North America. There are no known biological agents for Japanese honeysuckle. Deer may forage on the plant, but cause limited damage.

Timing of application is critical to effective Japanese honeysuckle control. Many herbicide treatments reduce foliage but leave buds and roots undamaged that can produce new growth. A foliar application of 1.5 to 3% glyphosate or 3 to 5% triclopyr shortly after the first frost appears to be the most effective treatment. Monitor treated plants in case a second herbicide application is necessary.

3. Recognition Cards – Invasive and Non-native Plants You Should Know,
by A. Richard and V. Ramey. University of Florida-IFAS Publication # SP 431. 2007.