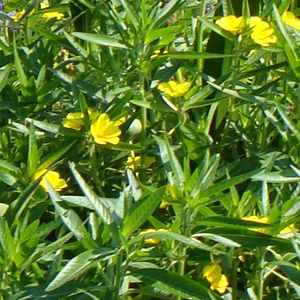 Florida has about 30 species of Ludwigia, all known for their clear yellow flowers with 4 to 5 sepals and petals. You may find Ludwigia hexapetala listed as a synonym of L. grandiflora, probably because the two are difficult to tell apart. Ludwigia hexapetala, however, is not native to central Florida where, since 2011, it has usurped native communities in the Kissimmee Chain of Lakes, and probably elsewhere. While both species have petioles longer than the hypanthium, L. hexapetala has slightly larger sepals and petals, overall longer and wider (more lanceolate) leaves, and less hairy, more glabrous leaves and stems than L. grandiflora. Identification becomes problematic when the floral characters overlap and/or when leaf shape and degree of surface hairs vary from change in plant growth stage or aquatic environment. Use of an entire population, rather than individual specimens, may be needed as well as chromosome karyotyping to distinguish the two. Ludwigia hexapetala is native to South America, but it is not understood if early records from the southeastern states (1844 and 1864) imply its nativity or introduction to South Carolina in 1844 and Georgia in 1864. With certainty, L. hexapetala was introduced to France in the 1840s and later Spain and Belgium. More recent records for Pennsylvania, Tennessee, Arizona and the Pacific Coast indicate movement by humans across nature’s geographical barriers.