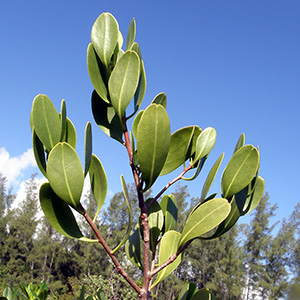 This Asian mangrove escaped from cultivation at Fairchild Tropical Botanic Garden. It was not known to be an invasive species in the late 1960s when it was planted in three of the garden’s lowland plots in Miami, but in 2008, biologists noticed that the trees had spread extensively throughout approximately 20 acres. The original planted trees were immediately removed, but the battle to find and remove the tens of thousands of trees and seedlings they produced continues. The invasive trees and seedlings went unnoticed for decades, in part because Lumnitzera looks very similar to the native white mangrove, Laguncularia racemosa. The infestation has not yet been documented to occur beyond the immediate vicinity of the botanic garden and neighboring Matheson Hammock County Park.

Lumnitzera flowers are small, white, five-petaled, and emerge from Summer through the fall. The fruits are buoyant, single-seeded green capsules which look similar to those of the native white mangrove. Unlike the native black, white, and red mangrove species, Lumnitzera fruits are not viviparous (seedling development does not begin while the fruit is still attached to the tree). This characteristic may contribute to its capacity to form a seed bank. Lumnitzera fruits are water-dispersed, although it is easy to believe that a hurricane could blow the lightweight fruit significant distances. This may explain the patchy distribution observed today.

Jennifer Possley, a field biologist at Fairchild Tropical Botanic Garden, thinks eradication is ultimately possible. This invasive species will need to be surveyed for years, however, so it will requires a long-term commitment from Fairchild, Miami-Dade County Natural Areas Management, and continued state funding.