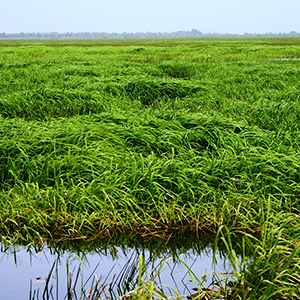 See A Giant Watergrass from the American Tropics by Colette Jacono, Aquatics (Spring 2016)

Luziola subintegra (Poaceae: Oryzeae) has been newly reported as occurring in Florida and the U.S. by biologists in south Florida*. First discovered in Lake Ocheechobee in 2007, this aquatic grass is spreading and, as of July 2009, 2,000 acres have been treated with herbicides. Luziola subintegra grows in both deep water and in terrestrial forms, spreads vegetatively and by seed, and aggressively competes with other native and exotic species. Compared to other Luziola species in the United States, L. subintegra is distinctly robust, with large, thick culms (3 mm in diameter or larger), inflated leaves with spongy sheaths and long, broad blades (7 mm wide or wider), and ligules from 1-4 cm long. Flowers are monecious, with staminate and pistillate portions in separate panicles. Staminate panicle terminal, open, one fertile floret per spikelet. Pistillate panicle axillary, congested, barely exserted from the sheath, primary branches sharply recurved when mature, one fertile floret per spikelet. Similar in habit to Paspalum repens.

Two large mats of Luziola subintegra (approximately two and eighty hectares each) were found around Harney Pond Canal in Fisheating Bay of Lake Okeechobee, Glades County. In addition, both emergent aquatic and terrestrial forms were found in the mouth of Fisheating Creek. As Fisheating Creek is the only unregulated inflow to Lake Okeechobee, the authors speculate that this is the point of introduction for the species. They suggested in their article that it be included on the Florida Exotic Pest Plant Council’s 2009 List of Invasive Plant Species. FLEPPC has responded by listing Luziola subintegra as a Category I species (invasive exotics that are altering native plant communities by displacing native species, changing community structures or ecological functions, or hybridizing with natives.)