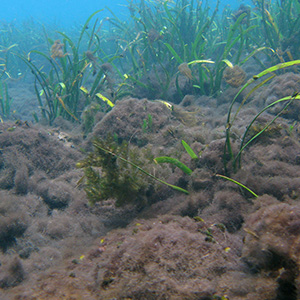 Lyngbya wollei (Lyngbya) is a large-celled, filamentous, mat-forming cyanobacterium (blue-green alga). It occurs in fresh water and especially flourishes in Florida’s spring-fed waters. An individual Lyngbya filament is usually unbranched. It is composed of large, discoid cells that are stacked within a firm, polysaccharide sheath; much as pennies are stacked within a roll of coins. Lyngbya mats may be several inches thick and can cover large areas of the water surface or benthic (bottom) sediments. Benthic Lyngbya mats are usually dark blue to black. Benthic mats may float to the surface due to trapped gases. When they float to the surface, the mats oxidize and turn yellow-orange (Hoyer and Canfield, 1996). Although photosynthesis is minimal at the mat’s surface, blue-green filaments characteristically trail down into the water from the underside of the mats. These “streamers,” which are shaded by the surface mats so as to receive only 1-2% of sunlight, exhibit maximum rates of photosynthesis. Mats composed of entangled Lyngbya filaments may cover entire coves and small ponds and be several feet deep. Mats can impede navigation and recreation, cover and smother submersed plants, and clog water intakes. In addition, they emit a strong and unpleasant earthy or musk-like odor (Speziale, Turner and Dyck, 1988).

B.C. Cowell and P.S. Botts (1994) reported that, “The large monocultures of Lyngbya in northeastern Kings Bay appear to have resulted from a combination of chemical spraying for Hydrilla control in the early 1980s and Hurricane Elena (fall 1985 ) which forced saline water into Kings Bay and eliminated 92% of the Hydrilla (Florida Department of Natural Resources, 1985). The rapid colonization of these habitats by Lyngbya (see Beer et al., 1986) and subsequent development of large benthic and floating mats capable of modifying pH and HCO3_ [bicarbonate] concentrations probably prevented recolonization by Hydrilla and other macrophytes. During this study we noted a replacement of Hydrilla by Lyngbya at Station 18 where mechanical harvesting of the former opened more habitat for colonization by Lyngbya, and dense, benthic mats formed immediately. Once established, the benthic mat might augment high pH conditions favoring its growth, and thereby impede the re-establishment of Hydrilla (Beer et al., 1986) (p.34).

Lyngbya cells can be transferred from one water body to another by boat hulls and bilge water, and by many animal species (e.g. birds, turtles, alligators, raccoons, insects, etc.) This can involve cells attached to the surface of the organism, or via viable cells in fecal material. Cells can also be transported by wind events such as storms and hurricanes that can transport water droplets or particulate matter over large distances (Phlips).