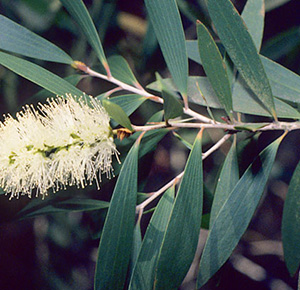 Melaleuca trees, (Melaleuca quinquenervia), also known as punk trees or paperbark tea trees, are native to Australia. In that country, melaleuca is well-known, planted in parks, valued by beekeepers, attractive to birds and bats. In fact, because of development, melaleuca trees in some parts of Australia are the subject of conservation efforts. In other places, there are dense forests of melaleuca, just as there were when Europeans first arrived there.

In Florida, however, melaleuca is a pest, especially in the Everglades and surrounding areas, where the trees grow into immense forests, virtually eliminating all other vegetation. Melaleuca grows in terrestrial as well as in completely aquatic situations. The Everglades, the mostly treeless “river of grass”, in some places has become the “river of trees”, a completely alien habitat to the plants and animals that have evolved to live in the glades. Since its introduction into the state, melaleuca has taken over hundreds of thousands of acres of Everglades, threatening the veryexistence of this internationally known eco-treasure.

Melaleuca produces huge quantities of seeds, which become small trees, which grow into almost impenetrable monocultures. Researchers are attempting to find ways to control melaleuca: herbicides are proving to be somewhat effective, but purposely-set management fires (and lightning-started fires) apparently actually help spread the seeds and trees. Recently, biological control insects have been released against melaleuca, but it will be some time before biocontrol results will be known.

Melaleuca is a tree, to about 80 feet tall. Its bark is whitish, spongy, peeling, and in many layers. Its leaves are to 5 inches long, alternate, evergreen, simple, short-stalked, narrowly elliptic. Leaf veins are more or less parallel. Melaleuca’s white flowers are small and crowded in bottlebrush-like spikes at branch tips. The fruit are short, cylindric or squarish, woody capsules with many tiny seeds.

View more information and pictures about melaleuca tree, as contained in the Langeland/Burks book, Identification & Biology of Non-Native Plants in Florida’s Natural Areas.

Here is a link to TAME Melaleuca.

3. Invasive and Non-native Plants You Should Know – Recognition Cards, by A. Richard and V. Ramey. University of Florida-IFAS Publication # SP 431. 2007.