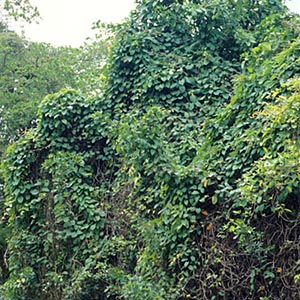 Sewer vine is a non-native invasive vine in Florida, very similar to the non-native invasive skunk vine (Paederia foetida). Sewer vine differs in that its fruit is a flattened, brown or yellowish brown, shiny capsule that is elliptic to broadly ovate. It contains 2 black, winged, elliptic to broadly ovate seeds. Skunk vine has round fruits and round seeds that lack wings. However both are very similar in smell, appearance, and growth habit. Sewer vine, native to southern Asia, is now locally abundant in Dade County and has been observed in Hillsborough and Marion counties. It flowers profusely from spring through fall and produces large quantities of viable seed.

Opposite, broadly lanceolate to elliptic, with relatively long petioles and smooth margins.

A flattened, orange to yellow, papery berry, to approximately 1 cm (0.4 in) in diameter; seeds winged.

Dangerous to native species as it can out compete and shade out even large trees. Spreads readily by seeds and by rooting at stem nodes. Stems often run beneath leaves and surficial duff, rooting as it goes. FLEPPC Category I

Text from Invasive and Non-Native Plants You Should Know, Recognition Cards, by A. Richard and V. Ramey, 2007. UF/IFAS Center for Aquatic and Invasive Plants, Publ. No. SP 431.

2. Invasive and Non-native Plants You Should Know – Recognition Cards, by A. Richard and V. Ramey. University of Florida-IFAS Publication # SP 431. 2007.