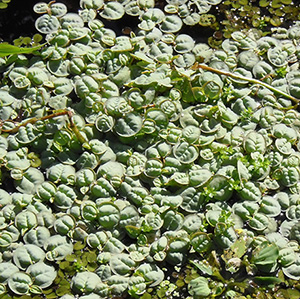 Herein, we present the first report of Phyllanthus fluitans growing wild in North America north of Mexico (Kartesz, in press; USDA, 2010). This fresh-water species native to South America is the sole free-floating aquatic of the large genus Phyllanthus. (Phyllanthus leonardianus, from Zaire, is also aquatic, but plants are rooted to the bottom; Cook, 1996). Common names of P. fluitans include red root floater and floating spurge (“Schwimmende Wolfsmilch”).1 Here we consider the record of its discovery in our region, how the plant may have been introduced here, and control measures undertaken so far. We also describe the morphology and color of P. fluitans, because this species is not represented in floristic manuals for our region. We base our morphological description on personal field observations and on living specimens collected from nature on Oct. 1, 2010.

All known localities were from De Soto County and the two most separate ones were twenty-six river-miles apart. Richard Wunderlin of the University of South Florida (USF) and George Wilder have prepared herbarium specimens for the Herbarium of Southwestern Florida (at the Naples Botanical Garden), USF, and for distribution elsewhere.

Shoots of P. fluitans either float on the water surface or, where plants bunch together, they may also extend a short distance into the air. The stems are brittle, are approximately 1 to 1.5 mm in diameter, and range up to 130 mm long. All stems bear foliage leaves, contrary to the habit of most Phyllanthus species in Florida in which foliage leaves are confined to lateral branches (Wunderlin and Hansen, 2003). A vegetative bud and a cymule (small cyme) of imperfect flowers develop axillary to a foliage leaf. Some vegetative buds expand into branches, thus manifesting vegetative reproduction.

Clusters of adventitious roots arise from older stem portions and extend into the water. The roots of a cluster emerge primarily from a node and from the distal portion of the immediately subjacent internode.

The foliage leaves are distichously arranged, range from 9 to 17 mm long and are separated by internodes 5 to 20 mm long. Each leaf exhibits a lamina, a petiole less than 1 mm long, and two brown transparent stipules. The lamina (the distal expanded portion of the leaf) is more-or-less orbicular, entire and unlobed marginally, cordate basally, and with a shallow notch distally. It exhibits two deep pockets – one on each side of the midrib. Lamina tissue that demarcates a pocket is concave on the bottom and protuberant on the top. Each pocket appears elliptical in top view, has a long axis parallel to the long axis of the lamina, and extends laterally from the lamina midrib nearly to the associated leaf margin. Superimposed upon individual pockets are obliquely oriented folds of the lamina. Whereas pockets and folds are protuberant, the lamina tissue defining them is neither thickened nor spongy. The lamina is water-repellant and both lamina surfaces are densely papillate.

We observed light blue-green foliage leaves and brown and pink roots. Cook (1996) described leaf color as green when young, becoming red at maturity. Wallach (2010) reported plants from the Bolivian Pantanal having glorious red color (“herrlich rote Farbe”). He also determined that cultivated plants vary in color, according to the intensity and duration of ambient light.

Cymules and flowers — Most cymules are three-flowered, but two or four flowers may occur. Each cymule exhibits at least one staminate flower and one pistillate flower.

The fruit, a capsule, is subtended by persistent tepals. It is depressed-globose and 3 mm wide. The capsule is trilocular and six-seeded, with two seeds filling each locule. The seeds, which outwardly resemble orange segments, exhibit numerous minute, dark-brown, superficial processes over a light brown background.

Manner of Introduction and Control Measures

Numerous articles online reveal that Phyllanthus fluitans is a popular aquarium plant. Thus, we suspect that the species was introduced here via the aquarium trade.

During Oct. 4-6, 2010, Mr. Ronnie Crosby of the Southwest Florida Water Management District sprayed certain infested localities with the herbicide Knockout™ (active ingredient = diquat dibromide). Treatment killed some but not all plants. Future treatments are envisioned. We fear that if treatments fail this aggressive species could become as problematical in Florida as are Pistia stratiotes, Eichhornia crassipes, and Salvinia minima (Langeland et al., 2008).

George Wilder is Botanist and Herbarium Curator at the Naples Botanical Garden, Naples, FL. He is a retired Professor of Biology from Cleveland State University (Cleveland, OH) who has conducted research in plant anatomy, plant morphology, and floristic botany. Michael Sowinski serves as Biological Scientist III for the Florida Fish and Wildlife Conservation Commission.

1 Wolfsmilch, literally translated as “Wolf’s milk”, is a German word for spurge.