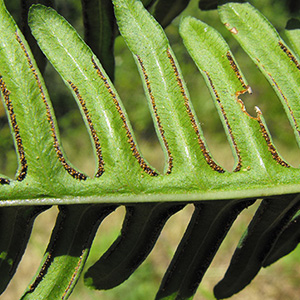 Giant brake fern (Pteris tripartita) is a large fern native to tropical Asia. This large ornamental fern has very stout stems with tall, three-parted fronds. The petiole (leaf stalk) is straw to reddish brown colored and can grow to be one to one and a half meters long. The large leaf blades are deltoid (triangular) in shape and pinnate pinnatifid (remaining sufficiently connected to each other that they are not separate leaflets). The pinnule (leaflet) margins are entire (smooth) to finely toothed. The sori (spore producing structures) are borne along the revolute (inrolled) margins on the underside of the pinnules.

Giant brake fern has naturalized in the West Indies, Central America, and South America and is one of four Pteris species that has escaped cultivation in Florida. It is found in low, moist habitats and appears to require continually saturated soils.

In a 1957 article on cultivated ferns in the American Fern journal, C.V. Morton1 states that giant brake fern was sold by Royal Palm Nurseries of Oneco, Florida beginning in 1896. The species was described as “reaching a height of 6 feet, forming a magnificent specimen.” Morton describes the species escaping cultivation and said that it was common in various locations in the Pompano, Florida area by 1928.

Giant brake fern was first vouchered in Florida in 1928 by John K. Small in a cypress swamp west of Pompano. In 1959, it was recorded and vouchered by Frank Craighead in Miami-Dade County on Old Cutler Road. It has since been vouchered in Desoto, Hillsborough, Martin, Palm Beach, Polk and Volusia counties.

Giant brake fern is found in a variety of Florida habitats including wet flatwoods, cattail stands, floodplains, hardwood swamps, cypress swamps and hardwood hammocks. Giant brake fern was found growing in a tree island in Water Conservation Area (WCA) 3B (Broward County) during the 2013 Everglades digital aerial sketch mapping (DASM) flight. Subsequent ground visits revealed that roughly two acres of the tree island understory contained scattered to dense patches of giant brake fern. The plant was found in both dense shade and open canopy gaps within the tree island. Giant brake fern was spotted again during the 2014 DASM flights. This time, the plant was observed growing in the southwestern part of the Arthur R. Marshall Loxahatchee National Wildlife Refuge (LNWR). Scattered patches were spotted within a roughly 60-acrearea, with a total of no more than eight acres of infestation. The giant brake fern occurred on floating peat mats and openings in dense cattail stands and appeared stunted and chlorotic (pale and yellow). Giant brake fern was already known to occur in the cypress strands on the east side of the refuge.

While there have been no records documenting significant invasiveness of this species, land managers are reluctant to leave it untreated in these areas of recent establishment. Treatment of the fern has been completed in WCA 3B, with a follow up treatment planned, if necessary. Giant brake fern locations in the refuge are within a current treatment unit and ground crews have been instructed to treat the fern when it is encountered. The fern has not been documented on tree islands within the refuge and it is hoped that this early eradication effort will prevent tree island establishment in Water Conservation Area 1. Future decisions and actions could be influenced by the extent of this fern’s distribution.