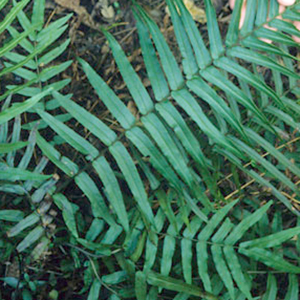 Pteris vittata, also known as Chinese brake or ladder Fern, is native to China. It is found in the Southeastern United States including Florida, Louisiana, and Georgia. Brake fern is also found in California. Although brake fern is not on the Federal or State Noxious Weed Lists, it is listed on the Florida Exotic Pest Plant Council’s Invasive Plant List, as of 1999.

Brake fern bears a close resemblance to swamp fern, Blechnum serrulatum. Swamp and brake ferns can be distinguished by the spore arrangement on the fronds. In brake fern, spores form lines along the edge of each pinna, whereas the spores of swamp fern form lines along the midrib of each pinna. Fronds of brake fern are dark green in color and only once divided, growing generally < 12 inches in a sunny site but > 20 inches in shade. Fertile fronds bear sporangia (spore producing structures) on the underside of fronds. A group of sporangia is referred to as a sorus. Individual sori are often mistaken for fungal pathogens or another type of disease.

Arsenic is a highly toxic heavy metal that is found in herbicides such as MSMA (monosodium-methane-arsonate) and in insecticides such as CCA (chromated copper arsenate), which is used to treat lumber against termites and rot. Pteris vittata is a hyperaccumulator of arsenic. It has been praised for its potential to remediate soils contaminated with arsenic. Even though it has the beneficial quality of being a natural bioaccumulator, it is still considered an invasive plant and should be managed as such.

Millions of spores are produced during the life cycle of a single fern, safeguarding the persistence of fern populations. Spore survival is low compared to the number of spores that are produced; however Pteris can out-compete native vegetation due to its invasive nature. The amount of spores produced can certainly provide a challenge for its control.

Steps to prevent spore movement or formation are the key in controlling brake fern. Since the microscopic spores are easily transported via clothing, wind and possibly water, contamination is a constant threat. Control measures should be employed when the fern is not producing spores, which occurs year-round in Florida. If control measures must be employed during spore formation and dispersal, then these areas should be treated at a time when workers will not be traveling to other sites in the same day. Take care not to drive equipment through the fern foliage, as this will also help to minimize spore movement.

Weeds such as Chinese brake fern generally invade open or disturbed areas following a burn, clearing mowing, etc., so these areas are particularly vulnerable to invasion. Therefore, a healthy ecosystem with good species diversity will help to deter infestation. Plants have been shown to thrive under high arsenic conditions, this being a competitive advantage for the species. Therefore small patches in seemingly isolated areas may be an indicator of a high arsenic contamination in the soil.

Mechanical controls, such as mowing or pulling the fronds, can reduce spore production and reduce fern populations. Rouging small, isolated patches may also be cost-effective.

There is limited research and data on biological control of brake fern.

There has been very little work performed on chemical control of brake fern. Ferns can be very difficult to control, and regrowth often occurs from the underground rhizoids. A 2 to 3% solution of glyphosate (Roundup, etc.) will probably be the most effective treatment, although triclopyr may also provide control (Garlon 4 at 0.5 to 2% solution plus surfactant at 0.25%).