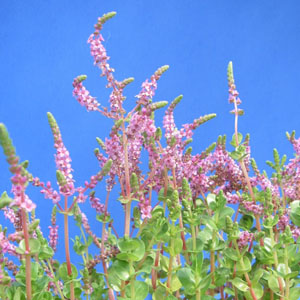 Rotala rotundifolia, or roundleaf toothcup, is a popular ornamental in the international aquarium industry that has more recently been promoted for water gardens. It is often referred to as “dwarf rotala” in the trade. It was first collected in 1996 from a flood control canal passing through a residential area in Broward County, Florida. Other naturalized populations have been found in Palm Beach County and Lee County, Florida. The only other known North American introduction point is Tuscaloosa, Alabama, where it was well-established around a campus pond until the pond was drained and left to dry. Rotala rotundifolia is native to India and Southeast Asia. It is in the same family, Lythraceae, as another aquatic weed, purple loosestrife (Lythrum salicaria).

Rotala rotundifolia is a creeping aquatic perennial with soft, dark pink stems that branch often to form low, creeping clumps. Leaves are rounded and attach closely to the stem without a leaf stalk. They are arranged oppositely on the stem. Flowers occur in spikes at the tip of stems. Plants flower prolifically in spring and early summer. Rotala rotundifolia can spread by floating stem fragments, which root adventitiously at lower nodes. The plant also produces viable seeds. Fruits are dry capsules that split open to disperse seeds. Other species of Rotala that occur in North America are the native Rotala ramosior and the introduced Rotala indica.

Grass carp present in infested canals do not appear to consume the plant.

Roundleaf toothcup (Rotala rotundifolia) is an emergent perennial aquatic plant from Southeast Asia, where it grows as a weed in rice paddies and wet soils. With purple flowers and rounded emergent leaves, it is a favorite of the aquarium and water garden industries. However, in the last 2 to 3 years, escaped populations of this aquatic plant have been found in northwest Alabama and throughout south Florida (USGS Non-indigenous Aquatic Nuisance Species Database; USDA Plants Database). Based on the native distribution of the plant in Southeast Asia, roundleaf toothcup currently occupies a very small percentage of its potential ecological range in the United States. It is expected that the plant would grow well in coastal communities throughout the southeastern U.S. from Virginia to Florida, and west to Texas.

Rotala grows about 4 to 5 inches per week. Once the plant reaches the top of the water, it grows across the surface and quickly shades out other aquatic vegetation. It requires high sunlight and CO2 concentrations for optimum growth. Roundleaf toothcup belongs to the family Lythraceae that encompasses about 21 genera and 500 species. The family is mainly tropical but has a number of temperate members. Purple loosestrife (Lythrum salicaria) which is a troublesome invasive weed in the United States also belongs to the same family. Thus roundleaf toothcup has the potential to invade sites in the southeastern United States. Rotala grows submersed and emergent similar to hygrophila. In Florida, plants display both terrestrial and aquatic growth forms and produce many small seeds within capsules. Although little is known about the biology of roundleaf toothcup, the ability of the plant to reproduce from vegetative fragments, and its ability to produce seeds, further raises concerns about its potential invasiveness.

Studies were conducted at the University of Florida-IFAS, Center for Aquatic and Invasive Plants (CAIP), Gainesville, FL. Young roundleaf toothcup plants were planted in 30 cm diameter plastic pots filled with 2/3 potting media covered with 1-2 inches of sand. The plants initially were very slow in growth. After 4-5 months, these plants were transferred to 100 L tubs for treatment with different aquatic herbicides. Herbicides treatments included submersed application of triclopyr at 250, 500, 1000, 2500 ppb; endothall at 250, 500, 1000, 2500 ppb; flumioxazin at 50, 100, 200, 400 ppb; diquat at 50, 100, 200, 400 ppb; and 2,4-D at 250, 500, 1000, 2000 ppb. Plants were harvested 10 weeks after treatment (WAT) and above ground biomass was determined as dry wt/plant. Plants were dried for 1 week, weighed, and statistically analyzed for treatment differences.

Table 1: Dry weight of Rotala rotundifolia at 10 weeks after application of herbicides; 0%=No control, 100%=total death.