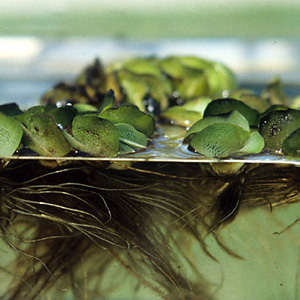 Salvinia molesta was added to the IUCN List of 100 of the World’s Worse Invasive Alien Species in 2013.

Salvinia molesta is native to southeastern Brazil and northern Argentina. It grows year round and has been found in north, central and southwest Florida where it is quickly eradicated when found. Giant salvinia grows rapidly and produces a dense floating canopy on the surface of ponds, lakes, and rivers.

Salvinia molesta is a floating aquatic fern that thrives in slow-moving, nutrient-rich, warm, freshwater. It spreads aggressively by vegetative fragments. It is dispersed long distances within a waterbody (via water currents) and between waterbodies (via animals and contaminated equipment, boats or vehicles). It may be cultivated by aquarium and pond owners and is sometimes released by flooding or intentional dumping.

In a nutlike sporocarp (a multicellular structure), trailing beneath.

Spreads rapidly and prolifically into a monoculture which can shade out underwater natives, leaving large bare bottom areas.

A two millimeter black subaquatic beetle, Cyrtobagous salvinae, has proven to be the best biological control agent for use against giant salvinia. First collected in 1980 by Australian researchers (from the native range in southern Brazil), the beetle adults and larvae feed on the leaf buds and young terminal leaves of the plant, causing leaf darkening, senescence and abscission. The beetle larvae tunnel into the rhizome. C. salvinae has been successful in at least 16 countries.3

1. Invasive and Non-native Plants You Should Know – Recognition Cards,
by A. Richard and V. Ramey. University of Florida-IFAS Publication # SP 431. 2007.