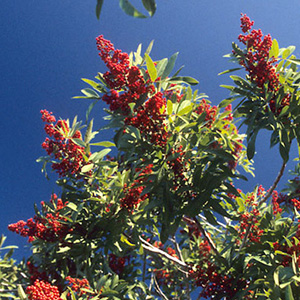 The family Anacardiaceae contains poison ivy, poison oak, poison sumac, and Schinus terebinthifolius, or Brazilian pepper-tree. People sensitive to poison ivy, oak or sumac may also be allergic to Brazilian pepper tree because it also has the potential to cause dermatitis to those with sensitive skin. Some people have also expressed respiratory problems associated with the bloom period of pepper tree.

Distribution of Brazilian pepper tree throughout Florida is widespread, although limited to the warmer areas due to sensitivity to cold temperatures. Brazilian pepper can be found as far north as Levy and St. Johns Counties, and as far west as Santa Rosa County. It is an aggressive invader of disturbed habitats; this characteristic has led to its placement on the Florida Exotic Pest Plant Council’s list of invasive species. Many plant communities such as hammocks, pinelands and mangrove forests are often invaded and dominated by Brazilian pepper tree.

Brazilian pepper-tree is a shrub or small tree that reaches over 30 feet in height, typically with a short trunk hidden in a thicket of branches. Some trees can live over 30 years. The leaves are alternately arranged with 1-2 inch long, elliptic, and finely toothed leaflets. The leaves are also reddish, often possessing a reddish mid-rib. The flower clusters are white and 2-3 inches long with male and female flowers that look very similar. The glossy fruits are borne in clusters that are initially green, becoming bright red when ripe. Seeds are dark brown and 0.3 mm in diameter. Flowering occurs from September through November and fruits are usually mature by December.

Birds and mammals are the primary mechanisms for dispersal, although seeds may be transported via flowing water. Seeds are viable for up to 2 months, losing viability as time progresses. Germination is improved by scarification. Typically, acids in an animal’s digestive tract provide adequate scarification required for germination. The invasiveness of Brazilian pepper tree in Florida can be attributed to its high germination rates and dispersal agents.

This shrub/tree is one of the most aggressive and wide-spread of the invasive non-indigenous exotic pest plants in the State of Florida. There are over 700,000 acres in Florida infested with Brazilian pepper tree. Brazilian pepper tree produces a dense canopy that shades out all other plants and provides a very poor habitat for native species. This species invades aquatic as well as terrestrial habitats, greatly reducing the quality of native biotic communities in the state.

The public should be notified to avoid cultivating, transplanting, or promote proliferation of Brazilian pepper. Care should also be exercised to avoid seed spread through disposal of cut trees. Due to its invasive nature, it is placed by the Florida Department of Environmental Protection under section 62C-52.011 as a Class I -“Prohibited Aquatic Plant.” This law prohibits sale and or movement of this species.

When utilizing aggressive mechanical methods, the entire plant, particularly the root system, should be removed. Roots ¼ inch in diameter and larger are able to resprout and produce new plants, so follow-up from this type of control method will be necessary. Pepper-tree seeds cannot tolerate heat and will not germinate following a fire, but the plant has the potential to resprout after a fire from roots.

Chemical methods for Brazilian pepper-tree control can be separated into soil residual, foliar and basal bark/cut stump treatments. Each of these will be discussed in detail in the following sections.

Soil Residual – Bromacil, diuron, and hexazinone are root-absorbed herbicides that can be very effective for the control of Brazilian pepper-tree. However, these are the slowest acting and have the most residual activity. This residual activity is beneficial for long-term control but can pose problems to non-target species. Oaks, maples and other hardwoods are particularly sensitive to these herbicides, so care must be exercised when using these materials.

Foliar Herbicide Application – Foliar applications can also be very effective, but thorough coverage is essential. Due to their large size and often-inaccessible habitat, these types of applications are limited in scope. However, foliar treatments are very good on seedlings. For larger trees, triclopyr or glyphosate herbicides should be applied directly to the tree’s foliage and will be translocated to other parts of the tree. The advantage of these materials is low to no soil residual activity. Arsenal is also effective, but has extensive soil activity and may pose problems to non-target vegetation. Another overall disadvantage of foliar applications is non-target damage to desirable species, especially with aerial foliar applications to larger trees.

Basal Bark/Cut Stump Treatments – (The following is taken from Gioeli and Langeland). Brazilian pepper-trees can be effectively controlled by cutting and treating the stumps with herbicide. The trunk should be cut as close to the ground as possible. Within 5 minutes, a herbicide containing glyphosate or triclopyr should be applied as carefully as possible to the thin layer of living tissue, called the cambium, which is just inside the bark of the stump The best time to cut Brazilian pepper-trees is when they are not fruiting, because seeds contained in the fruits have the capability of producing new Brazilian pepper-trees. If Brazilian pepper-trees that have fruits attached are cut, care should be taken not to spread the fruits to locations where they can cause future problems. Caution: Avoid touching the tree’s cambium. A rash can result. Some individuals are very sensitive to touching only the leaves. Use proper protective gear when sawing the tree and applying the herbicides.

Brazilian pepper-trees can also be controlled using basal bark herbicide application. An application of triclopyr ester (Garlon, Remedy – 44% concentration) herbicide is applied to the Brazilian pepper-tree’s bark between one half and one foot from the ground. Triclopyr is pre-mixed with a penetrating oil at a concentration of 14% triclopyr. The oil will cause the herbicide to pass through the bark. Therefore, girdling the tree’s trunk is not necessary and may, in fact, reduce the effectiveness. Once the basal bark treatment has been completed, it may take several weeks to exhibit symptoms of control. Defoliation and the presence of termites is an indicator that the treatment has been successful.

Basal bark treatments are most effective in the fall when the Brazilian pepper-trees are flowering. This is due to the high level of translocation occurring within the tree. Fruiting occurs during winter, and Brazilian pepper-trees that have been controlled using a basal bark treatment may retain their fruit. This situation will require that the area be checked for seedlings on a regular basis.

See more information and pictures about Brazilian pepper-tree, as contained in the Langeland/Burks book, Identification & Biology of Non-Native Plants in Florida’s Natural Areas.