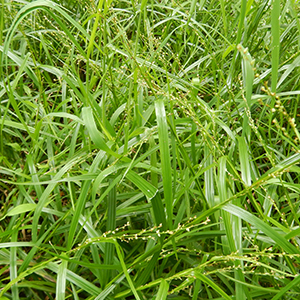 The genus Scleria is in the Cyperaceae family. Of the 13 species of Scleria in Florida, 4 are non-native. Scleria lacustris is listed as a FLEPPC Category I species. Scleria microcarpa and Scleria eggersiana are currently undergoing invasion risk assessments to determine their potential impacts on the landscape. Scleria microcarpa has already demonstrated invasive attributes. Scleria gaetneri, the last of the 4 non-native Scleria species in Florida, has only been found in one location in Broward County.

Scleria microcarpa is commonly known as tropical nutrush. It is a non-native perennial wetland sedge distributed through the Caribbean and Tropical Americas. This species was first noticed on the landscape in approximately 2007. It wasn’t until 2015, after it began forming dense stands in the understory of cypress and hardwood swamps, that it was positively identified. This species is currently (2018) only documented and vouchered in Polk, Orange and Osceola counties. Populations of this plant have been documented on several lakes within the Kissimmee Chain of Lakes (Lake Hatchineha, Lake Rosalie, Tiger Lake, Lake Kissimmee State Park, and Reedy Creek). Seeds of this plant are likely spread by wildlife and are small enough to be embedded in the tread of field shoes. Decontamination of clothing, footwear and equipment is crucial to avoid spreading this species.

Leaves of Scleria microcarpa are pleated in a “W” shape and decurrent, extending like wings down the stem beyond the point of attachment. Leaf edges are rough to the touch. Achenes (seeds) are tiny, smooth, and lack any scale-like structures protecting the seeds as seen in other species of this genus. Seeds are approximately 4mm in length and resemble tiny acorns. S. microcarpa can produce new stems through rhizomes and generally grow to 1m in height.

Seedlings, small plants, and mature plants all exhibit the decurrent leaves and triangular shaped stem in their vegetative state. To positively identify this species, the achenes are needed. Seedlings commonly will have the empty achene attached to the roots.

A foliar application of two percent glyphosate has been demonstrated to achieve the highest success in control, although replicate studies and additional research is still needed.