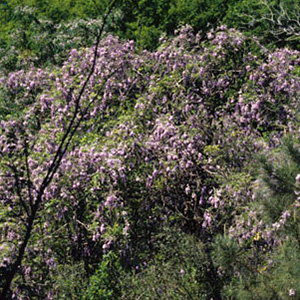 Wisteria is found from Maine to Florida, and as far west as Arkansas. There are native, W. frutescens, and non-native types of wisteria, including Japanese wisteria (W. floribunda) and Chinese wisteria (W. sinensis). Wisteria is sold in garden centers and nurseries and can be found in numerous home gardens across the country. The problem with wisteria lies in its growth habit. Wisteria is a vine that will grow virtually up anything in its path. By climbing into the canopy of trees or plants, it can shade them out, impairing those plants from effectively growing. Over time, wisteria will climb and twine around other plants, eventually shading and girdling native plants.

The stem of Japanese wisteria is white in comparison to the dark gray bark of Chinese wisteria. Its leaves are pinnately compound, 4 to 16 inches long arranged alternately on stems, containing 13 to 19 leaflets. Leaflets are ovate in shape with wavy margins.

Flowers of wisteria are borne on 4 to 20 inch long racemes that hang when leaves are newly emerged. Japanese wisteria flowers typically flower from the base to the tip of the raceme and are lavender in color. Flowering in Florida occurs in April and May. Velvety brown seedpods are produced after flowering. The pods are 4 to 6 inches long and the seed are poisonous.

Wisteria prefers full sun and well-drained soils, but will grow in less than desirable conditions. It is mainly found growing along roadsides, forest edges, and rights-of-ways.

Wisteria was introduced to the United States from Japan and China in the 1800’s for use as ornamental plants. Individual wisteria plants can survive for more than 50 years. Wisteria can reproduce by rooting at each node, via stolons, and will produce new shoots if cut back or trimmed. Wisteria is highly aggressive and can displace native species. Sizable trees have been killed by vining wisteria. When these large trees are killed, it opens the forest floor to sunlight, which allows seedlings to grow and flourish.

Wisteria can grow from seed or rooted stolons, so care must be taken to avoid cuttings and/or seeds being deposited in natural areas. Most infestations occur near home sites, where the plant has spread from an ornamental planting into the surrounding wooded areas.

Weeds such as wisteria generally invade open or disturbed areas following a burn, clearing mowing, etc., so these areas are particularly vulnerable to invasion. Therefore, a healthy ecosystem with good species diversity will help to deter infestation.

Mechanical methods are commonly used for wisteria management. For small wisteria infestations, cut climbing or trailing vines as close to the root as possible. Although this may be labor intensive it is a feasible pretreatment for larger infestations or in areas where herbicides cannot be used. Because wisteria will continue to sprout after it has been cut, it should be cut back early in the season, cutting sprouts every few weeks until the fall. This will stop growth of existing vines and prevent seed production. Wisteria vines should be removed from bases of trees and shrubs to prevent girdling as the trees and shrubs grow.

Another control tactic for small infestations is the removal of entire plants. Any type of digging tool can be used to remove the entire plant (roots and runners). It is important to know that any root pieces remaining in the soil may resprout to produce new plants. Fruit, roots, and other plant parts should be disposed of properly to prevent reinfestation.

There is limited research and data on biological control of wisteria.

In areas with established wisteria, a cut stump treatment is effective. Cut stems as close to the ground as possible and immediately apply a 25% solution of glyphosate or triclopyr to the stem. A foliar application of glyphosate may be necessary for sprouts. For larger infestations of wisteria foliar herbicide applications may be necessary. To avoid damaging nontarget species, stump treatments should be administered before foliar treatments. A solution of water and a 2% concentration of glyphosate or triclopyr with a 0.5% nonionic surfactant should be applied. If wisteria vines are growing up into trees or other desirable species, vines should be cut or pulled down to minimize damage to the desirable vegetation. Pulling the vines down without severing them from the underground rootstocks will allow the herbicide to move into the root and provide better control. The best time to apply an herbicide is in the spring and summer when wisteria is actively growing. Be sure to allow adequate time for the plant to regrow from the winter to ensure movement of the herbicide back into the underground portion. (As plants grow and mature, they begin to move sugars back into the roots).

3. Invasive and Non-native Plants You Should Know – Recognition Cards, by A. Richard and V. Ramey. University of Florida-IFAS Publication # SP 431. 2007.