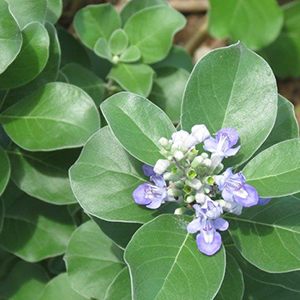 Vitex rotundifolia was intentionally introduced for horticultural use. It has demonstrated a very high invasive potential in coastal habitats along the southeastern United States, where it is disrupting native coastal ecosystems. It is native to coastal habitats in the western Pacific from Korea and Japan southward throughout tropical southeastern Asia, as well as northern Australia, Fiji, New Caledonia, and the Hawaiian Islands. It infests numerous locations along the coasts of South Carolina and North Carolina, with more sparse infestations in many states along the eastern seaboard. Many local ordinances have banned beach vitex.

Vitex rotundifolia began to show its invasive potential in the United States only 10 years after it became available in the horticultural trade. This species has a very rapid growth rate and a short generation time, reproduces sexually and asexually, and is readily dispersed by water. Although herbicide treatments are effective, stem fragments can readily form new plants. High drought and salt tolerance make beach vitex a strong competitor.